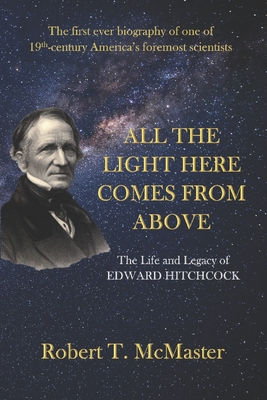 All the Light Here Comes from Above

The Life and Legacy of Edward Hitchcock

EDWARD HITCHCOCK was not the only star in the firmament of American science and philosophy in the nineteenth century, but he was certainly one of the brightest. Raised among the wheat and rye fields of Deerfield, Massachusetts, he was expected to pursue a farmer's life, but early on he developed a "strong relish" for science. In his teens he adopted his father's orthodox Christian faith and began studying for the ministry. By age twenty-five he had set a dual path for his life, science and religion.


Although Hitchcock's career as a pastor would be brief, preaching and spreading the Gospel would remain his highest calling. Nevertheless, his scientific impulses could never be denied, his spiritual life could not deflect him from the pursuit of scientific truth. In that respect he was perhaps unique for his time - and for today - for he saw no conflict between science and religion. "When rightly interpreted and understood," he wrote, "they will appear in perfect unison.


In All the Light Here Comes from Above: The Life and Legacy of Edward Hitchcock, Massachusetts, author Robert T. McMaster brings Edward Hitchcock to life, revealing the humanity of the man with dignity, charm, and humor. Relying largely on Hitchcock's own words from his letters, notes, and other unpublished manuscripts, McMaster presents an intimate view of Edward Hitchcock, his scientific achievements, his theological writings, as well as his battles with powerful personal demons that threatened him at every turn.


Praise For All the Light Here Comes from Above: The Life and Legacy of Edward Hitchcock…

“One hundred fifty-six years after Hitchcock’s death, Robert T. McMaster revisits the life and scientific work of the noted New England geologist, capturing his relevance to the history of scientific study. McMaster engages the reader with a combination of well documented details of Hitchcock’s scientific endeavors and the use of imaginative introductory “vignettes” to each chapter…McMaster’s new study demonstrates that Edward Hitchcock is worth a fresh look.”
- DARIA D’ARIENZO, co-author of Orra White Hitchcock, 1796-1863: An Amherst Woman of Art and Science and Meekins Library Archivist.

ROBERT T. MCMASTER’s interest in Edward Hitchcock began when he visited the Pratt Museum of Natural History at Amherst College over half a century ago. After completing his undergraduate studies at Clark University in 1970, he attended graduate school at Andover Newton Theological School and Boston College, earning a master’s degree in geology and education at B.C. in 1974. He taught middle school science and worked as an administrator for several environmental education organizations over the next fifteen years. Returning to graduate school in 1990, he earned an M.A. in biological sciences at Smith College and a Ph.D. in plant biology at the University of Massachusetts. He taught biology at Holyoke Community College in Holyoke, Massachusetts, from 1994 to 2014. He has authored many articles on botany, conservation biology, and the history of science, and has written three historical novels, Trolley Days, The Dyeing Room, and Noah’s Raven, set in New England in the World War I era.
Loading...
or support indie stores by buying on