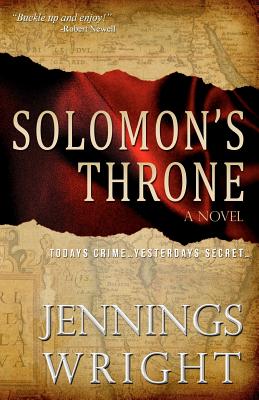 After a daring robbery, Rei and Gideon Quinn are recruited by their boss to recover a lost family heirloom: a letter written by St. Paul that could rewrite the history of the Church. What they discover is that an old journal, also stolen but little thought of, was the real object of the theft. An art preservationist, Rei begins to decipher clues in the journal, and finds that they lead to a treasure: the long lost throne of King Solomon. As they embark on a treasure hunt, following the Portuguese Spice Route through east Africa, the Middle East and into India, they must rely on letters from a long dead Jesuit priest. They must also keep one step ahead of the secret militant order that carried out the robbery and is after the same goal: the prize of a lifetime.Filled with fast paced action and having broad appeal, Solomon's Throne is an ingenious adventure that sweeps the reader around the globe in a race against time.

Born and raised in Rockledge, Florida, Jennings spent her early years reading anything she could get her hands on, when she wasn't spending time in and on the water. She won a prize in the 6th grade for her writing. Jennings attended the University of Tampa, graduating with a B.A. in Political Science, and almost enough credits for B.A.s in both English and History. She spent time over the years doing various kinds of script doctoring, business writing, editing, and teaching writing, but mostly having and raising her family, homeschooling her children, owning and running a business with her husband, and starting a non-profit to Uganda. Thanks to a crazy idea called NaNoWriMo, Jennings got back into creative writing in 2011 and hasn't stopped since. She currently lives in North Carolina with her husband, a political writer, and two children, and travels extensively.
Loading...
or support indie stores by buying on