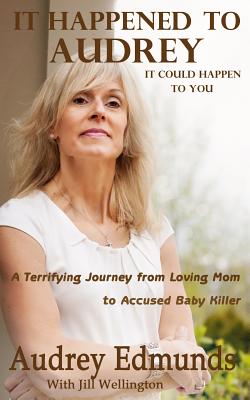 It Happened to Audrey

A Terrifying Journey From Loving Mom to Accused Baby Killer

Audrey Edmunds was a happily married young mother of two with a baby on the way; the neighborhood soccer mom in a small Wisconsin town providing casual childcare when the unthinkable happened. An infant died in her care at the same time the unknown science of Shaken Baby Syndrome hit the media. Swept up in a media frenzy, Edmunds was accused of killing the child through SBS. She was stripped from her children and husband and sent to prison where she would fight for freedom 13 years before she was finally exonerated after updated science showed her innocence. Audrey was and is an all-American mother from the Heartland who shares her story of hope and redemption in the face of unrelenting odds. Built as the ideal reader's club book, It Happened to Audrey includes questions that challenge all readers to think of the possibilities in today's ever-changing world. Edmunds is ultimately released from prison in the middle of a blizzard and reunited with her now grown children.

Jill Wellington has been a journalist for 35 years including 14 as an award-winning television news reporter in Michigan. Jill wrote the bestselling Penguin book, The Man Who Sees Dead People, and is working on a sequel. Jill has two children, Lindsay and Mark, and resides in Michigan with her husband Mark where she enjoys a second career as an award-winning photographer.

Audrey Edmunds is the proud mother of three daughters: Carrie, Allie and Jenni. She works tirelessly for others who are wrongfully accused of Shaken Baby Syndrome since her precedent-setting case. Audrey speaks publicly on radio and television about the faulty science of Shaken Baby Syndrome and was featured prominently in a 2012 New York Times Magazine story. She remains active in the Innocence Project and resides in Minnesota.