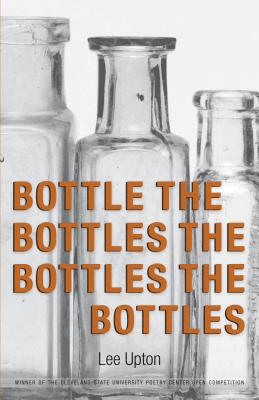 Poetry. "'What if I won't find what I expect when I open this?' is one of the first lines in Lee Upton's excellent new book, BOTTLE THE BOTTLES THE BOTTLES THE BOTTLES. It's the perfect salutation for a book that deals out genuine surprise in thought, image, and feeling with the formal dexterity of a Vegas pit boss. This is without a doubt my new favorite book. Upton has long been a well-respected poet, prose writer, and literary critic, but she deserves much more popular attention, including yours." Erin Belieu

"Lee Upton is a poet of rare intelligence and craft. She has a cold eye and a warm heart, and her poems are well-made, moving, intellectually stimulating. Among my favorites in BOTTLE THE BOTTLES THE BOTTLES THE BOTTLES, her admirable new collection, are poems that resemble an unconventional verse essay on a subject disclosed in the poem's title. Anyone who has spent dreary hours in time-consuming meetings will enjoy Upton's transmutation of the experience in 'The Committee.' A meditation on 'The Defeatists' people whose reflexive mantra is 'we're not out of the woods yet' includes the paradox that even their search for disappointment is bound to result in failure. In 'Modesty, ' Scheherazade, the 'patron saint of suspense, ' beguiles her tyrant with her tales, though 'At some level // she could do nothing for him.' This thought is capped off with the stunning couplet that ends the poem: 'Neither could have / Chekhov.' These are poems to read, reread, and ponder. The rich heritage of English poetry Herrick, Keats, Poe, Dickinson, Wallace Stevens hovers over Upton's labors and adds an extra layer of wit for the discerning reader." David Lehman

"These poems have tensile strength and pleasurable intelligence. They're muscular and ironic. Some are tough minded and thistle-prickly (as Flannery O'Connor was tough and prickly, also with a dash of Plath). The swallowed violence in fairy tales and 'the romantic' is reimagined here. Female archetypes are one of Upton's touchstones: Pandora, Salome, mermaids, Lady Macbeth, Persephone. The poems interrogate ways we used to live versus what we're in the grip of now. And they question what beauty is, in a voice both droll and fierce. They give off a dark gleam." Amy Gerstler.