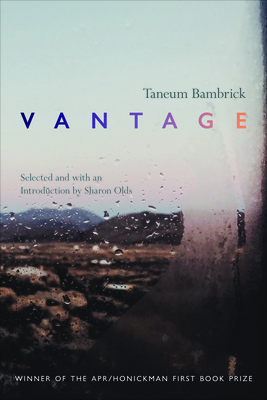 Vantage is a fictionalized account of the poet's real experiences working as the only woman on a six-person garbage crew around the reservoirs of two massive dams. Bambrick began writing poems in order to document the forms of violence she witnessed towards the people and the environment of the Columbia River. While working there she found that reservoirs foster a uniquely complex community--from fish biologists to the owners of luxury summer homes--and became interested in the issues and tensions between the people of that place. The idea of power, literal and metaphorical, was present in every action and encounter with bosses and the people using the river. The presence of a young woman on the crew irritated her older, male co-workers who'd logged, built houses, and had to suffer various forms of class discrimination their entire lives. She found throughout this experience that their issues, while not the same, were inherently connected to the suffering of the lands they worked. Introduction by Sharon Olds.

Taneum Bambrick is currently a Stegner Fellow at Stanford University. Her chapbook, Reservoir, was selected by Ocean Vuong for the 2017Yemassee Chapbook Prize. A graduate of the University of Arizona's MFA program, she is the winner of an Academy of American Poets University Prize, a Susanna Colloredo Environmental Writing Fellowship from the Vermont Studio Arts Center, and the 2018 BOOTH Nonfiction Contest. She lives in Ellensburg, Washington.
or
Buy Here
Copyright © 2020 American Booksellers Association