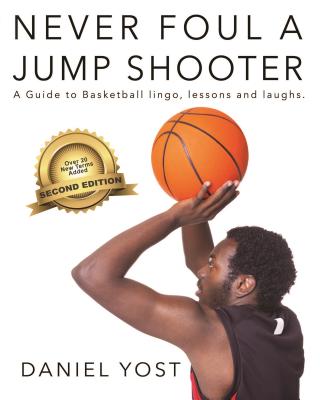 A Guide to Basketball Lingo, Lessons, and Laughs

NEVER FOUL A JUMP SHOOTER, A Guide To Basketball Lingo, Lessons and Laughs, began as the author having fun with a few quirky basketball expressions, such as "penetrate and dish" and "a foul waiting to happen." But then it just kept growing into a humorous look at wonderfully colorful basketball expressions.

But this is not a dictionary.  Or a story with beginning, middle and end.

The next time you're watching a game and you hear an announcer say, "The bank is open," or “it’s raining threes” or a certain someone ask, “how can a foul smell nice?”,  just turn to this book, find the term and have a chuckle.  Because basketball is about life, and life is better when we can all laugh at ourselves just a little.

Daniel Yost began as a sports writer in Portland, Oregon and thought that was his calling for life.  Five years later, he transitioned to freelance journalism.  After a while, he took a shot at novel writing.  When that didn't work, he went to Hollywood and found his true calling, writing and eventually directing motion pictures (see www.cascadeskyfilms.com).  One film stands out.  Drugstore Cowboy, which he co-wrote, and which won the Independent Spirit Award for its screenplay and also best screenplay from the year by the New York and Los Angeles film critics, the National Society Of Film Critics and PEN West International.

Drugstore Cowboy was first a novel, written behind bars by the late James Fogle, a gentle spirit with a wry, perceptive view of human nature who also happened to be a habitual drug thief when out of prison.  Yost rewrote the novel (uncredited), established a long-standing correspondence and friendship with Fogle, and helped get the novel published and the film made.

Meanwhile here is Never Foul A Jump Shooter, a comic riff on basketball jargon.  Yost knows of what he speaks, as he's been a jump shooter all his life.  After hearing that one man made a college basketball team in his 70s, Yost decided one of his future goals--in the far, far future of course--is to become the oldest living basketball player.  To do so, however, he may have to move to a remote village in Nepal or Azerbaijan, although it is questionable as to whether he could find a gym with a 3-point line in either place.