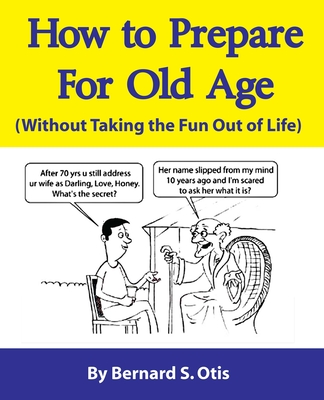 How to Prepare for Old Age

Without Taking the Fun Out of Life

In this touching, often humorous and very personal account, Bernie shares his 86 years of life, love, loss and laughter as an inspirational guide to what it means to age without growing old. His advice on love after 60, how to talk with family members about illness, what you should be prepared for when confronting tragedy and loss, what it means to be a caregiver to a loved one and many other of life’s challenges are a must for family members young and old.

Mr. Otis’ book is a treasure trove of personal and professional life experiences that will help you prepare for old age and take control of the nature of aging. Be prepared to laugh out loud and quietly shed a tear as Bernie takes you through the voyage of life.

During his 65 year career he has been instrumental in helping firms like ITT Corp, Hewlett Packard , Barkley’s Bank and Tiffany’s of New York , as well as being involved in the design and construction of food service facilities for: Disneyland, major hospitals, universities and restaurants.

Bernie lived in Las Vegas for 21 years and has done most of the hotels in that city as well as the majority of the hotels and restaurants in Sothern California, Santa Clarita and San Diego areas.

He joined Rotary in 1954 and has been president of  two clubs and charter member of three. He is a Paul Harris fellow.

As a trained hospice care giver, he works with family’s of terminally ill patients and does other community service. He is also a consultant to Lifeline Companion Services, a leading home health care organization.

Bernie has been actively involved in the National Indian Gaming Association and is a major speaker at industry conferences. His talk on the history of Las Vegas (where he lived for 21 years) is exciting, interesting and popular as are his talks on business and relationship building.

When his internationally respected wife, Anna, was diagnosed with cancer in 2010, Bernie put his career on hold and spent the next two and one half years at her side making certain that her final journey was as comfortable as possible.

Following Anna’s tragic passing in October of 2012, he moved into Fairwinds –West Hills Assisted Living facility in West Hills, CA where he continues his work with persons with disabilities, along with his other activities.

The Book “How to prepare for Old Age (Without Taking the Fun Out of Life), was published in May of 2015 and introduced at the New York Book Fair the end of May 2015. It is a humorous, touching and anecdotal book about the journey through life.

His first Book” Revenue Generation Through the Sale of Kumquats and ------- Other Things” has been most successful. To speak with Bernie contact his publisher Michael at mconant@incorgnitobooks.com.