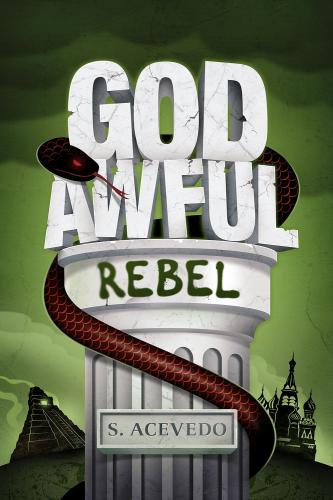 The once-banished god of love has more street cred than ever, thanks to twice saving the kingdom. He’s been declared heir to Olympus and aims to wed the girl of his dreams.

But enemies of the gods taste blood in the air, and a swarm of saboteurs come slithering in.

When three snake-haired sisters long assumed dead lay siege to the heavens, they threaten all that Cupid holds dear. Add a goddess fighting to hide the truth, and ancient elementals bent on revenge, and there might not be any world left to save.

Cupid, though, has a secret of his own, one even he doesn’t know. Will he discover it in time? Can the heir apparent and his fragmented forces crush this new danger under heel? Or is the venom coursing too deep? Only a charmer like Cupid can unwind these deadly coils.

GOD AWFUL REBEL smokes out the ways of old in the third and final bite of the GOD AWFUL series.

Mythology is the focus of her fiction writing, which features one god in particular. The god of love pestered her until she relented to write his story in the GOD AWFUL series of books, starting with GOD AWFUL LOSER, its sequel, GOD AWFUL THIEF, and the final book, GOD AWFUL REBEL.