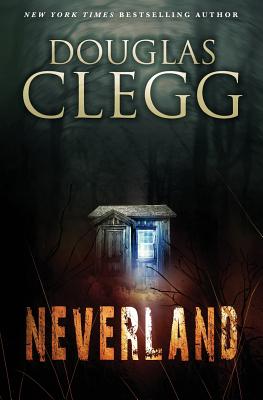 What calls to the children from within the dark shadows of the shack called Neverland? New York Times bestselling and award-winning author Douglas Clegg blends dark suspense and gothic horror in Neverland, a novel of deadly secrets and innocence corrupted. What lurks within the shack? What kinds of dangerous - and deadly - games do the children play there?

For years, the Jackson family vacationed at their matriarch's old Victorian house on Gull Island, a place of superstition and legend off the southern coast of the U.S. One particular summer, young Beau follows his cousin Sumter into a shack hidden among the brambles and windswept trees near bluffs overlooking the sea.

And within Neverland, the mysteries and terror grow...

For fans of Dean Koontz, Stephen King, and Bentley Little.

"Neverland is a masterpiece of dark suspense that will forever haunt your dreams." - Douglas Preston, New York Times Bestselling Author of Impact and (with Lincoln Child) of Relic and Gideon's Corpse.

"Douglas Clegg's Neverland is an unforgettable novel that combines creeping horror and psychological suspense. It starts like a bullet and never slows down." - David Morrell, New York Times Bestselling Author of Murder as a Fine Art.

"This is a powerful and thrilling tale, Douglas Clegg's best novel yet. The novel builds in whispers and ends in a scream. You will never forget Neverland." - F. Paul Wilson, New York Times Bestselling Author of Nightworld and the Repairman Jack series.

"From start to finish, Neverland is a haunting and tragic masterpiece. A powerful, thrilling tale, Douglas Clegg tells Beau and Sumner's incredible story with a subtle blend of humor and sadness that resonates with the reader long after the novel ends." - Marjorie M. Liu, New York Times Bestselling Author.

"A brilliant novel that grows richer with each reading, a multilayered marvel that will one day be recognized as one of the classics of supernatural literature." - Bentley Little, Bestselling Author of The Influence and The Haunted.

"Clegg's stories can chill the spine so effectively that the reader should keep paramedics on standby." - Dean Koontz, New York Times Bestselling Author of Odd Thomas and Innocence.

"Clegg knows exactly what scares us, and he knows just how to twist those fears into hair-raising chills. Neverland is Clegg at his best." - Tess Gerritsen, New York Times Bestselling Author of Girl Missing and the Rizzoli & Isles series of novels.

"Douglas Clegg . . . could have hung out with (in a better world) Robert R. McCammon, Bentley Little and Stephen King. These are guys who know America, and know how to literally scare up the best and worst aspects of the American character and slap them into a ripping yarn full of monsters, terror and enough action to keep the pages turning late into the night." - Rick Kleffel, book commentator for NPR

"Combing elements of H.P. Lovecraft, Stephen King, southern gothic, and adolescent angst, Douglas Clegg subsumes us in horror with Neverland, a tale so chilling it infected my dreams. Clegg builds horror in rich detailed layers. It is a testament to Clegg's gifts that we can't turn away; scary though the trip may be, the fright reaches out from the pages and pulls us along...Neverland is scary stuff, the product of a skilled writer of horror, and best read with the lights on." - San Francisco Book Reviews

"I can tell you without hesitation that Neverland is a true gothic masterpiece. I am incredibly impressed with it. This is a remarkable piece of literature."- Scott A. Johnson, Dread Central.com

"Neverland is a scary work written by an author soaring to the top of his game." - The Merry Genre Go Round Review.

"Neverland delivers . . . delicious slow horror...I'm going to put a library hold on one of Clegg's other novels, because if they're anything like this one, I'm an instant fan." - Sci-Fi Saturday Night.

Douglas Clegg is the bestselling and award-winning author of more than 30 books, including Goat Dance, You Come When I Call You, and The Priest of Blood. He is married and lives near the coast of New England.
Loading...
or support indie stores by buying on