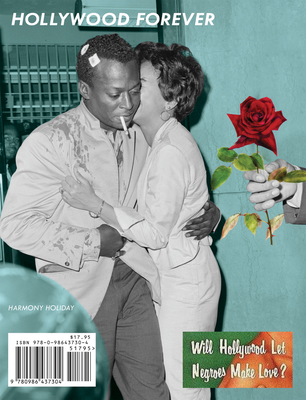 Holiday curates poems-as-text and image-as-impression, lyricism and activism. The "legacies" of Miles Davis and MLK and Billie Holiday and other icons collide, harnessing taboos they upheld triumphantly. Layers of a story coalesce in restricted space producing ghettos, or a mythological advertising omniverse wherein shadow and light integrate, complicating our fantasies.

The New Mythology Begins to Love me

With an immediacy that seems at once artless and profoundly sophisticated. You know how Billie Holiday sounds vague and precise like an unmarked grave that might your father's but he had another name for his disappearance, he called it love eventfully shattered with enough of it

Born in Waterloo, Iowa, poet and choreographer Harmony Holiday was educated at the University of California, Berkeley and at Columbia University. Her debut collection of poems, Negro League Baseball (2011), won the Motherwell Prize. Go Find your Father/A Famous Blues, a "dos-a-dos" book featuring poetry, letters and essays, came out in late 2013. Holiday lives in Los Angeles.