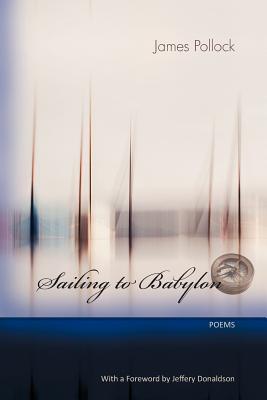 Sailing to Babylon is the first full-length collection from James Pollock. These are poems of exploration and discovery of the self and the universal. Closer to home, there is the schoolboy fascination with the English teacher; the grandmother's old Bible; a Dantean-style extended account of a hiking adventure with a young son, fully realized in terza rima. Further out in time and geography, Pollock muses on figures from Canadian history--explorers Henry Hudson, David Thompson, and John Franklin; pioneering literary theorist Northrop Frye; and pianist Glenn Gould. Each of these quests has accompanying trials or triumphs. This is a collection full of surprises and pleasures, with a treasure-chest mapped for discovery in "an image of the world/ made small enough to hold inside the mind." A book that has the power to take you "to the place/ exactly where you always meant to go."

PRAISE FOR SAILING TO BABYLON:

James Pollock is a poet of Northwest Passages, a learned Canadian poet with a splendid ear and a Romantic sensibility, a keen explorer of inner and outer states. Sailing to Babylon is not only a fully realized and accomplished work of art--it is also a noble book.
- Edward Hirsch

You will hear in these poems something like the jouncing and ruckus of a wilderness traveler adjusting the gear on his back, steeling his resolve, finding his footings and heading off. In the end Pollock's departures are an exploration of that inward Northwest Passage where the borderlines themselves between real and imagined, the present and the past, the found and the lost, seem almost to dissolve--passages, as Pollock says, "breaking up within"--and where, in this anthem of mixed voices, our wondering where home is becomes our wandering where home is. . . . I would almost prefer to be the reviewer, or some boastful exegete revealing to readers one hundred years from now some of the untold treasures that, its many readers notwithstanding, lie hidden here still.
- Jeffery Donaldson (from the "Foreword")

The metaphysics of the pause, the transition, the image: James Pollock has the Transtromer instinct, but he plays the music in his very own key. These are haunting, deeply digested, nearly always surprising poems.
- Sven Birkerts

James Pollock grew up in southern Ontario, Canada. He graduated summa cum laude with an Honors B.A. in English literature and creative writing from York University in Toronto, and earned an M.A. and Ph.D. in creative writing and literature from the University of Houston, where he held several fellowships in poetry. He was a John Woods Scholar in poetry at the Prague Summer Program at Charles University in Prague, and a work-study scholar in poetry at the Bread Loaf Writers' Conference. His poems have been published in AGNI, The Paris Review, Poetry Daily, and more than a dozen other journals. His critical reviews have appeared in Contemporary Poetry Review, Books in Canada, The New Quarterly, and elsewhere, and a collection of his criticism, You Are Here: Essays on the Art of Poetry in Canada, is forthcoming from The Porcupine's Quill. He is an Associate Professor at Loras College in Dubuque, Iowa, where he teaches poetry in the creative writing program. He lives in Madison, Wisconsin.