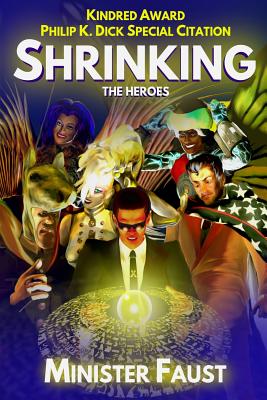 WINNER: Carl Brandon Society Kindred Award (2007)SPECIAL CITATION (Runner-Up): Philip K. Dick Award (2007)Meet the F*O*O*J, the World's Greatest Heroes: OMNIPOTENT MAN: A body with the density of steel, and a brain to matchTHE FLYING SQUIRREL: Aging playboy industrialist by day, avenging krypto-fascist by nightIRON LASS: Mythology's greatest warrior, but the world might be safer if she had a husbandX-MAN: Formerly of the League of Angry Blackmen, but not formerly enoughTHE BROTHERFLY: Radioactively flyPOWER GRRRL: Perpetually deciding between fighting crime or promoting her latest album, clothing line or sex scandalThey're Earth's mightiest super-team. And dysfunctional as hell.Having survived arch-criminal assaults in the 1950s, intergalactic aggression in the 1960s, affirmative action battles in the 1970s, and having finally defeated all its arch-enemies in a battle global in the 1980s, the F*O*O*J finds itself in a peaceful world without super villains--and thus bereft of a mandate.Without external foes, the phenomenal F*O*O*Jsters are reduced to waging toxic office politics rife with their own arcane idiosyncrasies, bizarre perversions, mutual contempt and explosive neuroses, leading to what must sooner or later be a workplace super-powered civil war.Only one woman can save them from themselves: Dr. Janice Brain-Silverman, AKA Doctor Brain, the world's leading therapist for the extraordinarily-abled.But when the planet's most hallowed hero dies unexpectedly, career-ending depression descends, accusations fly and conspiracy theories boil--is the age of heroes truly over, or has an old foe returned to exact revenge on them all? Can the F*O*O*J survive its two greatest threats: assassination and group therapy? Advance Praise for "UNMASKED When Being a Superhero Can't Save You From Yourself" by Doctor Brain "Brilliant, easy-to-implement life-changing guidance and classic examples from the careers of our greatest legends, written by the leading therapist of the extraordinarily-abled."--The bermensch Reader"If I'd had this book twenty years ago I could've saved myself decades of rage, violence and self-loathing, not to mention a $4 billion judgement against me by the city."--Clifford David Stinson, AKA the Blue Smasher"Were I still at my psychiatric practice and had I not begun my career of mental butchery that led to my incarceration, I would unreservedly recommend this fine volume to all my living patients."--Menton the DestroyerAbout the authorDr. Janice Brain-Silverman lives and works at the Hyper-Potentiality Clinic inside the refurbished Mount Palomax Observatory in Los Ditkos. She has been helping hyper-hominids for over twenty years, and is the author of such best-sellers as: Seven Habits of Highly Defective NemesesWhy Do Bad Villains "Happen" to Good Heroes?Evil Geniuses Who Hate Humanity and the Women Who Love ThemSacred Identity: Reclaiming the Demi-God in YouSecrets from Menton's Brain: Using Two Lefts to Make Yourself RightBeing Super-Mom in Today's MultiverseSide-Kicked When the Alpha-Hero Treats You Like OmegaBulletproof, SchmulletproofSecret Origins, Starring: Your Miserable Life.

Minister Faust is a long-time community activist, writer, journalist, broadcaster, public speaker and martial artist in several disciplines. After deciding to become a comic book writer and artist when he was ten, he secretly changed his ambition to science fiction novelist after glancing through the glossary to Frank Herbert's Dune. He'd planned to become an ecologist so as to gain Herbert's ecological depth, but before his first university class switched his entire enrollment to English Literature, having concluded that learning to write was more relevant to the career of a writer, and that going to endless lab classes at 7 am for four years would likely be hell on earth. As a member of E-Town's anti-fascist movement in 1990, he and other youth marched on a Nazi skinhead gang house, the hub at that time of a series of violent assaults. Confronted there by skinheads with guns, Minister Faust held them back with nothing but the power of his words. Thus began a speaking career that has taken him across Canada and before of crowds in the tens of thousands. A radio broadcaster from 1989 until 2012, he hosted Africentric Radio (formerly The Terrordome), for which he interviewed luminaries such as Tariq Ali, Molefi Kete Asante, Martin Bernal, Noam Chomsky, Chuck D., Austin Clarke, Angela Davis, Karl Evanzz, Tom Fontana, Glen Ford, Nalo Hopkinson, Reginald Hudlin, Ice-T, Janine Jackson, Michael Parenti, Ishmael Reed, Gil Scott-Heron, Vandana Shiva, David Simon, Scott Taylor, and many more. As a radio and print journalist, he's gone as far as the 1995 Million Man March in Washington, DC, and to the Ain-al-Hilweh Palestinian refugee camp in southern Lebanon, to collect stories and hear directly from people living and making history. A maverick novelist increasingly described as one of the finest voices of his generation, Minister Faust is the author of the critically acclaimed The Coyote Kings, Book One: Space-Age Bachelor Pad, The Alchemists of Kush, and the Kindred Award-winning Shrinking the Heroes. His latest is War & Mir, Volume I: Ascension. Minister Faust refers to his sub-genre of writing as Imhotep-Hop--an Africentric literature that draws from myriad ancient African civilisations, explores present realities, and imagines a future in which people struggle not only for justice, but for the stars.
Loading...
or support indie stores by buying on