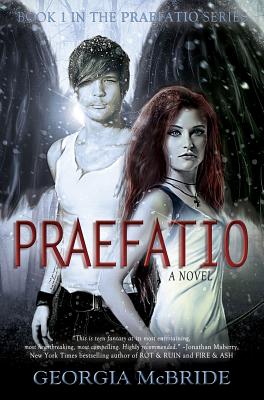 Volunteers from a small town in Missouri have been searching for seventeen-year-old Grace Ann Miller for weeks. Police never mentioned the note she left to say she planned to run away, or her reportedly strange behavior just prior to going missing. They suspect something sinister and more terrifying may be at play.

But Grace Ann Miller is no ordinary runaway. She's found on the estate of international rock star Gavin Vault, half-dressed and yelling for help, and becomes an instant media sensation.

Grace insists on Gavin's innocence, that he didn't harm her as police suspect. But the evidence is overwhelming, and Grace will need a lot more than her word to clear Gavin's name.

So Grace does the one thing she knows will save him. Despite the potential consequences, she tells police the truth: She is an angel. She didn't run away. She left to protect the people she loves.

But authorities believe that Grace is ill, suffering from Stockholm Syndrome, the victim of assault and a severely fractured mind.

Undeterred, Grace reveals the secret existence of angels on earth, an ancient prophecy and a wretched curse that could change everything humans believe about their origins.

But are these the delusions of an immensely sick girl, or could Grace’s story actually be true?

Praise For Praefatio: A Novel…

“Georgia McBride proves that you can take any genre to a higher level. This is teen fantasy at its most entertaining, most heartbreaking, most compelling. Highly recommended.”  —Jonathan Maberry, author, Flesh & Bone and Rot & Ruin

Georgia McBride writes speculative fiction for teens and tweens and even has an adult non-fiction book brewing in that overactive brain of hers. In her spare time she can be found rounding up 2 kids, 1 German Shepard, 2 Chihuahuas, and 1 parrot. She loves music of all kinds, wine and movies, and is addicted to coffee and bacon. Some of her favorite creators are George Lucas, Steven Spielberg, JJ Abrams and Ridley Scott. She would cut off her right (or left) arm to work with any of the above.

She supports adoption (people and dogs), music appreciation, reading/literacy, animal rescue, cultural exchange, eco-friendly activities, equal rights for everyone and believes that we must achieve world peace.
Loading...
or
Not Currently Available for Direct Purchase