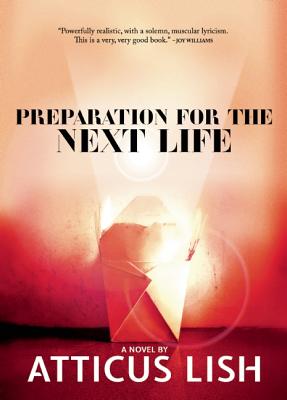 Preparation for the Next Life

Zou Lei, orphan of the desert, migrates to work in America and finds herself slaving in New York's kitchens. She falls in love with a young man whose heart has been broken in another desert. A new life may be possible if together they can survive homelessness, lockup, and the young man's nightmares, which may be more prophecy than madness.

Praise for "Preparation for the Next Life"


"Perhaps the finest and most unsentimental love story of the new decade." -The New York Times
"As bold and urgent a love story as you ll read this year." -Wall Street Journal
"A sledgehammer to the American dream." -Kirkus Reviews
"One of the most acclaimed debut novelists of the year." - New York Observer
Lish (Life Is with People) turns to fiction with this stunning debut novel that plums the underbelly of New York City, tracing the relationship of Zou Lei, a Chinese immigrant working in a tiny noodle restaurant, and Skinner, an AWOL Iraqi war veteran and wanderer. Enduring stints in prison and homelessness, Zou Lei and Skinner experience life on society's fringes. Lish destroys the American dream with struggles his characters face and New York City is anything but idyllic. Zou Lei and Skinner have their budding relationship tested by insurmountable odds, and their own foibles and peculiarities are rendered with vivid detail. Lish's prose is at once raw and disciplined, and every word feels necessary. -Publishers Weekly
"So much of American fiction has become playful, cynical and evasive. "Preparation for the Next Life" is the strong antidote to such inconsequentialities. Powerfully realistic, with a solemn, muscular lyricism, this is a very, very good book." Joy Williams

The next life of Atticus Lish's novel is the one you have to die to know. It's also the next civilian life of a soldier ravaged by three tours in Iraq, and the dodgy life of an immigrant in the city's sleepless boroughs. The work is violent, swift, and gloriously descriptive. It is love story and lament, a haunting record of unraveling lives. Lish says starkly and with enormous power: the spirit prevails until it doesn t. A stunning debut.

--Noy Holland, author of "Swim for the Little One First "

An illegal Chinese immigrant meets a broken American warrior, and the great love story of the 21st century begins. The intersection of their paths seems inevitable, irrevocable. Their story: tender, violent, terrible, and beautiful. Atticus Lish's prose, lyrical and taut, sentences as exact and indisputable as chemical formulas, is trance-like, evangelical in its ability to convert and convince its reader. "Preparation for the Next Life" is that rare novel that grabs you by the shirt and slaps you hard in the face. Look, it says. It isn't pretty. Turn away at your own risk. In case you haven't noticed, the American Dream has become a nightmare. Atticus Lish has your wake up call. He has created a new prototype of the hero, and her journey provides us with a devastating perspective on the "promised land" of the post 9/11 U.S., where being detained is a rite of passage and the banality of violence is simply part of the pre-apocalyptic landscape. -Christopher Kennedy, Ennui Prophet.