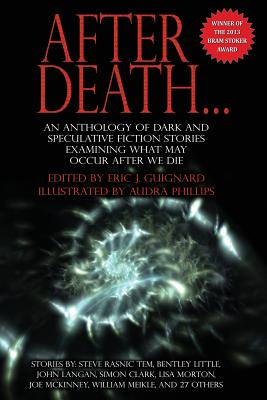 Death. Who has not considered their own mortality and wondered at what awaits, once our frail human shell expires? What occurs after the heart stops beating, after the last breath is drawn, after life as we know it terminates?

Does our spirit remain on Earth while the mortal body rots? Do remnants of our soul transcend to a celestial Heaven or sink to Hell's torment? Are we offered choices in an individualized afterlife? Can we die again in the hereafter? Is life merely a cosmic joke, or is it an experiment for something greater?

Included within this critically acclaimed anthology are answers to these queries alongside tales and suppositions relating from traditional ghosts to the afterlife of e-coli. Explore the afterworld of an Australian cowboy. Discover what the white light really means to the recently departed. Consider the impact of modern, or future, technology on the dead. Follow the karmic path of reincarnation. Travel from the 999th level of Fengdu's Hell to the gates of Robot Heaven.

Enclosed are thirty-four all-new dark and speculative fiction stories, individually illustrated by Audra Phillips, and exploring the possibilities "after death."

Someone to Remember by Andrew S. Williams

The Last Moments Before Bed by Steve Rasnic Tem

Circling the Stones at Fulcrum's Low by Kelda Crich

I Will Remain by David Steffen Tree of Life by Aaron J. French

Like a Bat out of Hell by Jonathan Shipley

The Overlander by Jacob Edwards

Beyond the Veil by Robert B. Marcus, Jr.

Prisoner of Peace by David Tallerman

A Feast of Meat and Mead by Christine Morgan

Be Quiet At The Back by William Meikle

Marvel at the Face of Forever by Kelly Dunn

The Unfinished Lunch by Trevor Denyer

I Was The Walrus by Steve Cameron

The Devil's Backbone by Larry Hodges

The Death of E. Coli by Benjamin Kane Ethridge

Final Testament of a Weapons Engineer by Emily C. Skaftun