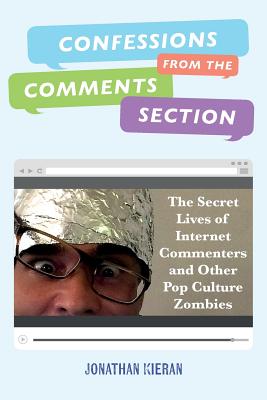 Confessions From The Comments Section (Paperback)

The Secret Lives of Internet Commenters and Other Pop Culture Zombies

Internet comments sections are the Roman coliseums of the Information Age, filled with noisy spectators desperate to be heard and slobbering to be satisfied. They may try to blend-in with the crowd by employing fake usernames, but we all know what kind of people they REALLY are, once they start to trumpet their relentless opinions Without regard for others, folks like the All-Caps Idiocy Maximizer, The Yelp Whelp, The Drunken Ranter, and The Puppy Suckler feed like a ravenous zombie-horde upon the putrefying scraps of our bloated pop culture. Clamoring for attention, characters like Rhonda the Reasonable, The Garden-Variety Idiot, The Big Word Hurler, and The Special Snowflake fuel the great, ongoing war between The Smarts and The Stupids. True identities may remain hidden, but in the jungle of internet comments sections, people reveal far more than they think about their secret lives ... and why civilization is heading for a spectacular crack-up. In 'Confessions from the Comments Section: The Secret Lives of Internet Commenters and Other Pop Culture Zombies, ' humorist Jonathan Kieran shines an uproarious and irreverent light upon 33 different "types" of internet commenter, exploring issues like religious hypocrisy, narcissism, and celebrity obsession while probing the hilarious depths to which human behavior will plunge when people think they are anonymous online. Read it and laugh or read it and weep ... especially if you happen to recognize yourself.

Jonathan Kieran is a writer, illustrator, and pop culture critic/humorist who lives near beautiful Big Sur, California. He's young enough to know better and old enough to know worse, but life still finds him mostly in the rich, chocolatey center of it all.
or
Buy Here
Copyright © 2020 American Booksellers Association