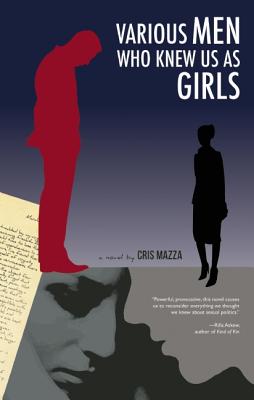 Various Men Who Knew Us as Girls

Would her life have been better if she d had sex with her supervisor when she was 23? Hester Smith is a woman who always played life near the sidelinesuntil she decides to rescue a teenage Mexican prostitute. She's up against the border sex trade in Southern California that works like a drug cartel, where the smuggled contraband is teenage girls forced to work as prostitutes in undeveloped canyons just outside suburbia. Law enforcement agencies know it happens, as do investigative journalists, yet the illegal sex trade continues to exist.
While she prepares for the rescue, Hester discovers that the man with whom she almost had an affairher mentor when she was a 23-year-old student teacherhad been simultaneously having a sexual relationship with a 16-year-old student. Hester mines her own memories of the would-be affair and ultimately tracks down the former 16-year-old. When these two women with a shared scandal in their pasts confront one another, the meeting coincides with the last step necessary to rescue the teenage prostitute Hester has tried to protect. It is only this mayhem that allows Hester to finally take ownership of her decisions and regrets.

Cris Mazza is also the author of "Something Wrong with Her," a hybrid memoir published by Jaded Ibis Press that is the companion piece to "Various Men Who Knew Us As Girls." She has authored over a dozen other novels, including "Trickle-Down Timeline," "Waterbaby," and "Is It Sexual Harassment Yet?." A native of Southern California, Mazza now lives in Chicago and is a professor in the Program for Writers at the University of Illinois Chicago.
Loading...
or
Not Currently Available for Direct Purchase