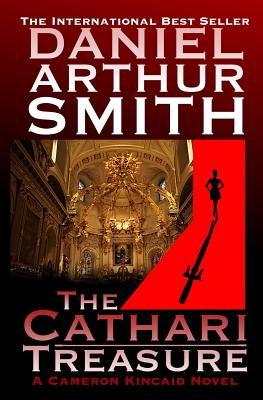 A coveted prize has surfaced in New York drawing Celebrity Chef Cameron Kincaid into an 800-year-old war. In 1208 the clandestine Rex Mundi began the Albigensian crusade in an effort to gain control of the treasure held by the Cathar. For thirty-six years the Languedoc region south of France was washed in blood. By 1244 the last of the Cathari were eradicated when the Ch teau de Monts gur finally fell. Though the Rex Mundi searched everywhere, the Cathari Treasure remained elusive. After thwarting assassins in the library of his restaurant Le Dragon Vert Cameron, a suave former Legionnaire, vows to escort a young woman and her guardian to safety. Cameron learns from the two the secret Cathari faith and of the Rex Mundi that believe the women are key to the long sought Cathari Treasure. Relentlessly pursued from the Le Dragon Vert in New York, through the streets of Boston, Montreal, Toronto, and Quebec, Cameron tires of fleeing. The Rex Mundi will ultimately wipe out the Cathari to get the treasure unless Cameron takes the battle to them, a confrontation to seal his fate or ensure the survival of the two women and a faith he does not fully understand. * * * * * THE CATHARI TREASURE is an adventure thriller that features the Cathar and the Rex Mundi, two groups from the pages of history and mystery now gaining global popularity.

Daniel Arthur Smith is a USA Today bestselling author. His titles include Spectral Shift, Hugh Howey Lives, The Cathari Treasure, The Somali Deception, and a few other novels and short stories. He also curates the phenomenal short fiction series Tales from the Canyons of the Damned and Frontiers of Speculative Fiction. He was raised in Michigan and graduated from Western Michigan University where he studied philosophy, with focus on cognitive science, meta-physics, and comparative religion. He began his career as a bartender, barista, poetry house proprietor, teacher, and then became a technologist and futurist for the Fortune 100 across the Americas and Europe. Daniel has traveled to over 300 cities in 22 countries, residing in Los Angeles, Kalamazoo, Prague, Crete, and now writes in Manhattan where he lives with his wife and young sons. For more information, visit danielarthursmith.com
Loading...
or support indie stores by buying on