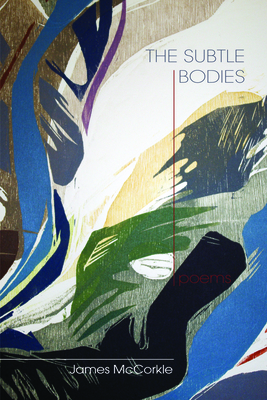 The Subtle Bodies moves between lush landscapes and the violence imposed by humans upon the land, making contact with the world as it ebbs into a digitized silence.

Into bracken, goldenrod, thick meadows
it is all here

nothing is for granted
or said another way, everything granted
forthcoming, always

errancy and directed, maple-starts in last year's leaf litter
and inch-thick saplings in the lilac's
nest of limbs

James McCorkle grew up in Florida, received his MFA at the Iowa Writer's Workshop, his PhD from the University of Iowa, and currently teaches at Hobart and William Smith Colleges in New York.

James McCorkle grew up in St. Petersburg, Florida, received his M.F.A. (Iowa Writer's Workshop) and Ph.D. from the University of Iowa, and currently teaches in the Africana Studies and First Year Seminar Programs at Hobart and William Smith Colleges in upstate New York. He is the author of The Still Performance (a study of post-modern American poetry), the editor of Conversant Essays: Contemporary Poets on Poetry, and most recently, an associate editor of The Greenwood Encyclopedia of American Poets and Poetry. Evidences, his first poetry collection, was selected by Jorie Graham for 2003 the American Poetry Review / Honickman Award. He has received the Sarah Lawrence's Campbell Corner Poetry Award and fellowships from the Ingram Merrill Foundation and the National Foundation for the Arts. His poems have appeared in numerous publications, including The American Poetry Review, Crazyhorse, The Harvard Review, Ploughshares and Web-Conjunctions. McCorkle's poems are by turns lyric and political, they rely on landscape and observation drawn from his childhood in Florida to his long residency in upstate New York. Jorie Graham, in citing McCorkle's Evidences, wrote in her introduction that in his poems "one feels the imagination push up and take the measure of the adversary--loss and destruction of the human and inhuman kind . . . . I do not believe it is possible to miss how brave this book is, how daring, and given over to beauty."
Loading...
or support indie stores by buying on