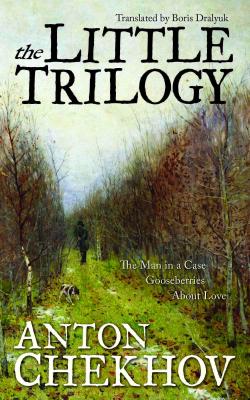 Fiction. Translated from the Russian by Boris Dralyuk. Anton Chekhov (1860- 1904) is universally regarded as a master of the short story, and nowhere is his rich contribution to the genre on fuller display than in the so-called Little Trilogy (1898): "The Man in a Case," "Gooseberries," and "About Love." These interconnected stories reflect the entire range of Chekhov's gifts, his ability to hold comedy in balance with tragedy, to wrest beauty from ugliness, and to transform the pathetic into the sublime. Written rather late in his career, THE LITTLE TRILOGY also serves as a kind of artistic autobiography, charting the evolution of his own approach to story-telling from humorous caricature, to Tolstoyan sentimentality, to a uniquely Chekhovian study of "individual cases," in which generalities are dispensed with and judgment is withheld.

"Reading Chekhov was just like the angels singing to me." Eudora Welty

"Chekhov makes everything work the air, the light, the cold, the dirt, etc. Show these things and you don't have to say them." Flannery O'Connor

"Ach, Tchekov Why are you dead? Why can't I talk to you in a big darkish room at late evening where the light is green from the waving trees outside? I'd like to write a series of Heavens: that would be one." Katherine Mansfield

"If I have to choose between Chekhov and most hip-hop, I'll go with Chekhov." Cornel West.