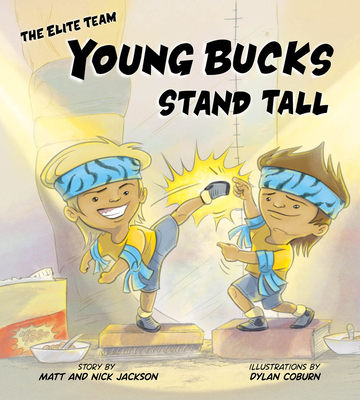 The Young Bucks, Matt and Nick were inseparable. They went to school together, shared the same room, and even finished each other’s sentences.
The Young Bucks thought they could take on anything, inside the wrestling ring and out, with their Elite Team friends by their sides.
But when Matt and Nick are singled out, who will have the courage to stand up and speak out?

Matt and Nick Jackson of the wrestling tag team, the "Young Bucks," remember growing up being the smallest kids in class. It bothered them at times, but soon learned that height did not matter. What mattered was, how hard they were willing to work to achieve their dreams. Although still not the biggest, Matt and Nick Jackson travel the world as professional wrestler, living their dreams and inspiring fans. Dylan Coburn is an artist who draws for a living. His creative talents include production and storyboarding in the comic and movie world. As a little boy, he drew so often that his fingers were calloused and indelibly colored from pencil and ink. He’s also done his fair share of Wrestling, and now reserves his activity for daily bouts with his son, Zac.

"The messaging of [Young Bucks Stand Tall], which focuses in on combating bullying and having confidence in yourself, is a timeless message ... Young Bucks Stand Tall is a well done story that fans will enjoy not just for the references to the popular wrestling characters, but also for the valuable life lessons and conversations that the story will spark between reader and child." —Ryan Droste, comicbook.com
or support indie stores by buying on
Copyright © 2020 American Booksellers Association