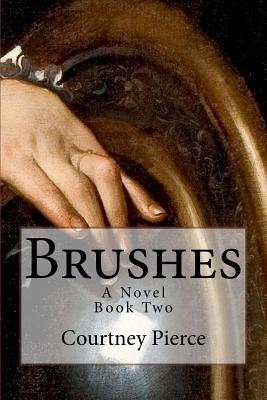 The magic started in STITCHES and blossoms in BRUSHES, the second installment of the Collinses' quest to transform their lives from ordinary to extraordinary as they sleuth their way toward retirement. The power of art makes big waves for Jean and Spence Collins. With the magic of the ancient fabric still inside of them, the Collinses make their first visit to their newly inherited B&B in Richmond, Virginia. While there, Jean becomes obsessed with a small painting called The Dancing Boy. She says the painting speaks to her-and it really does It has secrets to tell, and so do members of the immortal Gaines family who come out of eternal retirement. Immortality really can be a choice, and the possibility of it ignites a passion in the Collinses to realize their dreams in this life. Jean and Spence have no idea the firestorm they're about to unleash after they bring The Dancing Boy home to Portland, Oregon. When they take the painting to the museum to be cleaned by a gifted art student, the worlds of fine art, financial fraud, and magic converge to draw the Jean and Spence into the deadly game of a Ponzi scheme-a game that puts both their magical painting and their inheritance at risk. But the Collinses have a plan. Together with their friend at the FBI, agent Jon Segert, Jean and Spence devise a scheme of generosity-that requires a little immortal help.

Courtney Pierce is a fiction author living in Oregon with her husband of thirty-four years and bossy cat. The STITCHES Trilogy emerged from her own magical history, which encompassed a twenty-year career as a former executive in the Broadway entertainment industry. The series showcases Courtney's love of exquisite fabric. BRUSHES brings to life her passion for great art. The third book in the series, RIFFS, will turn up the volume with the magic of music. Follow all of Courtney's books at courtney-pierce.com
or
Buy Here
Copyright © 2020 American Booksellers Association