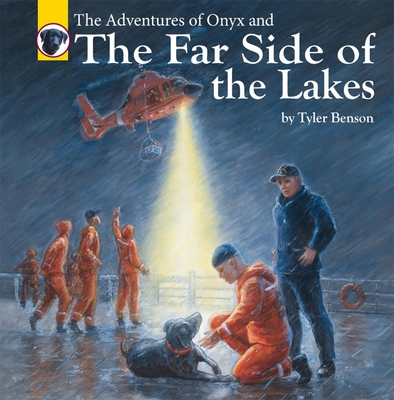 The Adventures of Onyx and The Far Side of the Lakes

Hogan and Onyx are aboard the U.S. Coast Guard Cutter Alder as it makes its annual voyage across Lake Superior to where the SS Edmund Fitzgerald sank forty years earlier during a violent storm. As Hogan, Onyx, and the rest of the crew brave gale-force winds and freezing rain to commemorate the twenty-nine sailors who lost their lives in the 1975 tragedy, both Hogan and Onyx become ill as the Alder is tossed around in the rough waters. When Onyx suddenly collapses, the captain orders a medical evacuation and calls a Coast Guard helicopter for assistance. Hogan and Onyx are rushed to Station St. Ignace, but what the flight crew discovers when they examine Onyx will surprise everyone.

Tyler Benson is from St. Louis, Michigan.  He has served in the United States Coast Guard for more than 18 years.  He began writing short stories about his search and rescue adventures in the Coast Guard to educate his three young daughters about what Daddy does when he goes on duty for 48 hours at a time.  He wanted his daughters to learn the importance of service to their country and helping those in need.  To help his daughters better understand his job, Tyler wrote the stories featuring his real station's morale dog, Onyx.  These stories soon evolved into a dream.  This dream would be a tribute and a way to bring recognition to all who serve or have served in the United States Coast Guard.  Tyler is still currently serving in the United States Coast Guard in Highlands, New Jersey, where he lives with his wife, Kristy, and four children.

David Geister is a Minneapolis, Minnesota-based artist who specializes in historical art, picture book illustrations and landscape paintings.  He has illustrated over a dozen children's books including, The Adventures of Onyx series, B is for Battlecry, and Surviving the Hindenburg, to name a few.