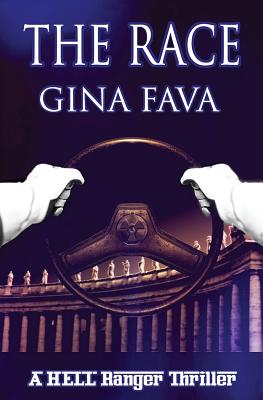 Ah, Rome, The Eternal City in all its majesty: St. Peter's Square, the Spanish Steps, the Pantheon, and the Coliseum. Devlin "Lucky" Lucchesi has made a home here with his pregnant wife, Ella, and his five-year-old son, Marcello. As a car racing champion who has won the hearts of fans across Europe, Devlin has settled into a happy-go-lucky existence. His alter ego as a covert special operative HELL Ranger feels far away. That is, until a terror attack decimates Rome's train station, and rips Lucky's life apart. To blame is Ishmael Zaid, an elusive international terrorist, and a villain from Devlin's past. Devlin vows revenge and he teams with his blood-brother Lupo, the sexy BBC reporter Ana Malia, and his HELL Ranger crew to battle Ishmael's "Race" of Islamic extremist followers. But, as they rush to diffuse a dozen more bombs set to wipe Rome off the map by midnight, it becomes unclear who is with Lucky, who is against him, and who might be up for sale along the way. The stakes skyrocket when Ishmael kidnaps young Marcello as retribution for a transgression in Devlin's past. What's more, in the aftermath of a recent papal election, Ishmael violates the sanctity of the Vatican, robbing one of its ancient relics to employ as an audacious symbol of war on mankind. Devlin and Ishmael finally collide in a showdown that will ultimately determine the fate of the world. Can Lucky and his band of HELL Rangers beat Ishmael at his own game, or will they be blasted into Eternity along with the City of Seven Hills?

Gina Fava is a Buffalo, New York native and lives with her family in New England. A University of Buffalo graduate, she also holds a law degree, and has studied both art history and counter-terrorism in Rome. She is an avid car racing fan, and she travels to Italy often to hunt down her characters' favorite wines. She is the author of award-winning short stories, and is a member of International Thriller Writers. THE RACE, her debut novel, is the first in her series featuring the HELL Rangers, a car-racing special operations force. Visit www.GinaFava.com to learn more about her next novel, and connect via her blog, Facebook, and Twitter.
Loading...
or support indie stores by buying on