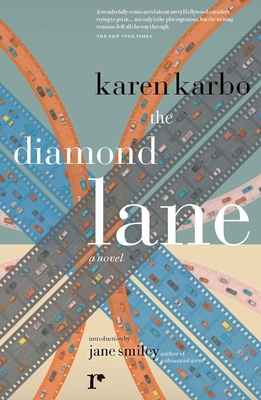 Reluctantly back home in L.A. after 16 years in Africa, documentary filmmaker Mouse FitzHenry longs for the harsh, teeming jungle life her lens took in so lovingly. Wrenched Stateside by a family emergency, with her longtime boyfriend/collaborator in tow, Mouse is instantly beleaguered by a past she'd leapt continents to escape. In this rollicking novel, Karbo explores familiar subjects -- the phony glitz of Hollywood, the fairy tale lure of love and marriage -- with precision, compassion, and humor. Mouse's paramour, Tony, a Brit who calls her "poppet," adores L.A. and all that it can do for him and his screenplay. Mouse, meanwhile, caving in to maternal pressure, agrees to marry Tony and then proceeds, with the help of an old flame, to film around her unwitting fianc a documentary on the entire process of their betrothal called Wedding March. A flawless, page-turning story emerges as Mouse and Tony manage -- often with hilarious subterfuge -- to keep their projects secret from one another. With its laugh-aloud moments and a cast of brilliantly drawn characters, this is a tale to treasure.

Karen Karbo is the author of 14 award-winning novels, memoirs, and works of nonfiction, including the best-selling Kick Ass Women series: Julia Child Rules, How Georgia Became O'Keeffe, The Gospel According to Coco Chanel, and How to Hepburn. Her 2004 memoir, The Stuff of Life, about the last year she spent with her father before his death, was a New York Times Notable Book, a People Magazine Critics' Choice, a Books for a Better Life Award finalist, and a winner of the Oregon Book Award for Creative Nonfiction. Her short stories, essays, articles, and reviews have appeared in Elle, Vogue, Esquire, Outside, The New York Times, Salon, and other magazines. She lives in Portland, OR. Jane Smiley's novel A Thousand Acres won the Pulitzer Prize and the National Book Critics Circle Award in 1992, and her novel The All True Travels and Adventures of Lidie Newton won the 1999 Spur Award for Best Novel of the West. She lives in Carmel, CA.
Loading...
or
Not Currently Available for Direct Purchase