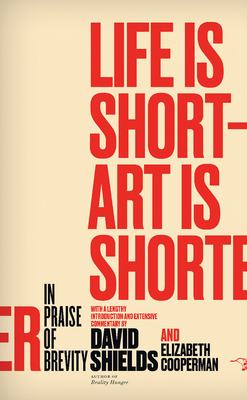 In Praise of Brevity

Life Is Short--Art Is Shorter is not just the first anthology to gather both mini-essays and short-short stories; readers, writers, and teachers will get will get an anthology; a course's worth of writing exercises; a rally for compression, concision, and velocity in an increasingly digital, post-religious age; and a meditation on the brevity of human existence. 1. We are mortal beings.
2. There is no god.
3. We live in a digital culture.
4. Art is related to the body and to the culture.
5. Art should reflect these things.
6. Brevity rules. The book's 40 contributors include Donald Barthelme, Kate Chopin, Lydia Davis, Annie Dillard, Jonathan Safran Foer, Barry Hannah, Amy Hempel, Jamaica Kincaid, Wayne Koestenbaum, Anne Lamott, Daphne Merkin, Rick Moody, Dinty W. Moore, George Orwell, Jayne Anne Phillips, George Saunders, Lauren Slater, James Tate, and Paul Theroux.

David Shields is the author of fifteen books, including Salinger; How Literature Saved My Life, published by Knopf; Reality Hunger, named one of the best books of the year by more than thirty publications; The Thing About Life Is That One Day You'll Be Dead, a New York Times bestseller; Black Planet, a finalist for the National Book Critics Circle Award; and Remote, winner of the PEN/Revson Award. The recipient of a Guggenheim fellowship and two NEA fellowships, Shields has published essays and stories in dozens of publications, including the New York Times Magazine, Harper's, Esquire, Yale Review, Village Voice, Salon, Slate, McSweeney's, and The Believer. His work has been translated into fifteen languages. He lives with his wife and daughter in Seattle, where he is the Milliman Distinguished Writer-in-Residence at the University of Washington. Elizabeth Cooperman's work has appeared in the Writer's Chronicle, Seattle Review, and 1913: A Journal of Forms. She earned her MFA in poetry from the University of Washington in 2010, lives in Seattle, and works for Poetry Northwest and a ninety-year-old blind man.
or
Not Currently Available for Direct Purchase
Copyright © 2020 American Booksellers Association