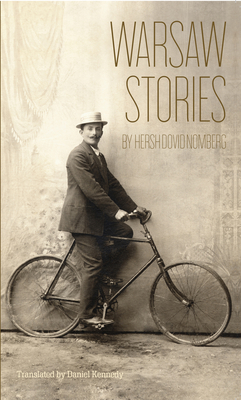 Fiction. Jewish Studies. Short Stories. Translated by Daniel Kennedy. Available for the first time in a new English translation, Nomberg's stories explore modern Jewish life in the growing cosmopolitan city of Warsaw: young intellectuals in pursuit of truth, beauty, and love; working class fathers tempted by schemes for easy money; teenagers divided between their traditional religious upbringings and the world of secular culture and political revolution. By turns comic, satiric, and earnest, Nomberg's stories take the pulse of Warsaw's Jewish society at the dawn of the twentieth century.

Hilarious and insightful, a glimpse of a vanished world seen close at hand, with poverty, propriety, romance and much more. Knowing the author was the roommate of the great Yiddish writers Avrom Reyzen and Sholem Asch would assure him of a kind of immortality at one remove. But he was a forgotten genius, forgotten until...now A very fine translation, too --Paul Buhle

Tinged with the deeply hopeless, yet nervously optimistic perspective of pre-WWII Jewish intellectuals, the stories of Hersh Dovid Nomberg evoke the lost world of Jewish luftmentsh autodidacts floating between urban cultures while in the process of creating their own. Daniel Kennedy's sharp translation provides a look through an historical keyhole in which we see a rich Yiddish landscape riddled with young Jews deep in intellectual ferment, culturally unmoored, but with a curiosity for life that swells hearts.--Eddy Portnoy