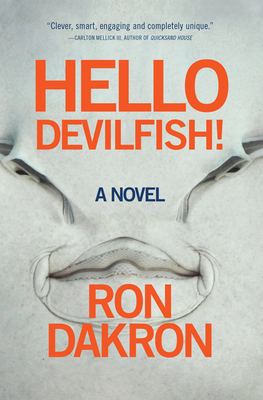 Hello Devilfish is a first-person (or first-fish) account of a giant blue Japanese movie monster stingray's attack on contemporary Tokyo and his tragic morph into human form. Using elements of Japanese shock-pop and the infamous Hello Kitty meme, the story is told in comic narrative from the stingray's point of view as he gleefully creams Tokyo into rubble. The stingray is soon pursued by Squidra, a love-struck giant squid. She demands love; he refuses. In an epic waterfront battle, she traps him in a human-growth hormone bath that changes him into a puny human -- a reverse metamorphosis -- monster to man. Refusing to accept his humanity, the stingray acts like his former giant self while trying to find food, shelter, romance -- and avoid the destructive rampage of his stalker squid love interest. Hello Devilfish is told in a readable, comic narrative occasionally spiced with Manglish words. Funny and very readable, underneath the outlandish plot is a truly fresh critique of contemporary culture and mainstream literature.

Ron Dakron is the author of the novels infra, Newt, Hammers, and Mantids. His work runs the gamut from surrealism to sci-fi pastiche, with a prose style that he describes as "haplessly Chicagoan and influenced by working class whites, African American slang and Yiddish comedy." His novels explore differing styles of poetic prose, from Romaticism, to cubism, B-movie satire to mangled Japanese translation. Point No Point tagged his novels as a cross between jive bullshit, hip-hop Henny Youngman, and full-tilt Rimbaudian street-smartass sublimity. Raven Chronicles judged him as sinister as a thirteen-year-old with a lighter and a keg of butane. Publishers Weekly deemed him a writer with a fine ear and plenty of gusto. Born in Chicago, Dakron majored in English at Elmhurst College and Lawrence University before moving to Seattle where he worked as a street violinist and house painter, and developed a confrontational poetic performance style "drenched in faux punkery." He began writing novels in his late 20s, and considers himself "a proud working-class novelist who dreams up Big Lit." Dakron currently lives in Seattle, WA.
Loading...
or support indie stores by buying on