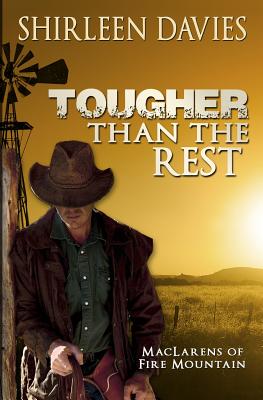 Tougher Than The Rest

"A passionate, fast-paced story set in the untamed western frontier by an exciting new voice in historical romance." Niall MacLaren is the oldest of four brothers, and the undisputed leader of the family. A widower, and single father, his focus is on building the MacLaren ranch into the largest and most successful in northern Arizona. He is serious about two things--his responsibility to the family and his future marriage to the wealthy, well-connected widow who will secure his place in the territory's destiny. Katherine is determined to live the life she's dreamed about. With a job waiting for her in the growing town of Los Angeles, California, the young teacher from Philadelphia begins a journey across the United States with only a couple of trunks and her spinster companion. Life is perfect for this adventurous, beautiful young woman, until an accident throws her into the arms of the one man who can destroy it all. Fighting his growing attraction and strong desire for the beautiful stranger, Niall is more determined than ever to push emotions aside to focus on his goals of wealth and political gain. But looking into the clear, blue eyes of the woman who could ruin everything, Niall discovers he will have to harden his heart and be tougher than he's ever been in his life...Tougher than the Rest.

Shirleen Davies grew up in Southern California. She attended Oregon State University, and has degrees from San Diego State University and the University of Maryland. During the day she provides consulting services to small and mid-sized businesses. But her real passion is writing emotionally charged stories of flawed people who find redemption through love and acceptance. She now lives with her husband in a beautiful town in northern Arizona. Shirleen began her new series, MacLarens of Fire Mountain, with Tougher than the Rest, the story of the oldest brother, Niall MacLaren. The other books in the series, Faster than the Rest, Harder than the Rest, and Stronger than the rest, are due for release between August and December 2013. Shirleen loves to hear from her readers. Write to her at shirleen@shirleendavies.com Visit her at http: //www.shirleendavies.com Comment at her blog http: //www.shirleendavies.com/blog.html Facebook Fan Page https: //www.facebook.com/ShirleenDaviesAuthor Twitter her at http: //twitter.com/shirleendavies Goodreads: https: //www.goodreads.com/book/show/18213096-tougher-than-the-rest
Loading...
or support indie stores by buying on