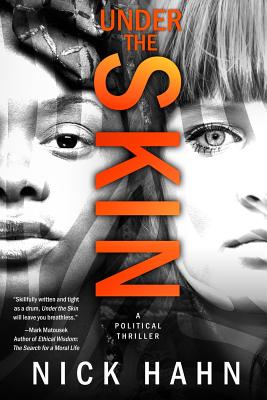 In Under the Skin, a brutal African dictator is challenged by two young women from different worlds: Maggie Kincaid, born to wealth and privilege in New York, and Nabby Kibugu, born to poverty and obscurity in the African bush. Their unlikely friendship sparks a fiery political drama with the potential to upend the leadership of a country and change the lives of millions. Maggie is working as an intern for an American company in Uganda when she meets longtime pen pal Nabby. She becomes ensnarled in a clandestine political campaign to elect Nabby as the first female president of Uganda. The women risk everything as they take on a corrupt, abusive government. In a startling move, they decide to enlist the improbable help of a notorious warlord, and it's anyone's guess as to whether their dangerous gamble will pay off.

Praise For Under The Skin…

Nick Hahn’s debut novel is a riveting exploration of friendship, race, and courage, told through the intersecting stories of two fascinating women caught in a storm of politics, intrigue, and spiritual struggle. Skillfully written and tight as a drum, Under the Skin will leave you breathless.

Author of Ethical Wisdom: The Search for a Moral Life, Mark is a multi-book published author, reviewer, and writing coach.

Nick Hahn started writing while a student at the University of Notre Dame. His travel diaries reflect fourteen years of working among indigenous peoples from Africa to Latin America, where he witnessed social and political unrest. He makes his home in rural eastern Connecticut near Long Island Sound, where he writes and narrates audiobooks. Under the Skin is his first novel.
Loading...
or support indie stores by buying on