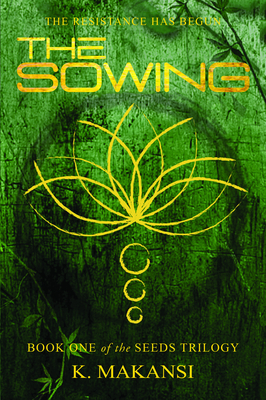 The Sowing (The Seeds Trilogy #1)

Remy Alexander wants vengeance. When she and her friends discover a clue that could help reveal the truth behind the massacre that claimed her sister's life, she may finally get her chance.

Valerian Orlean wants answers. Why the girl he was in love with disappeared three years ago. Why she joined the Resistance - a covert organization sworn to destroy everything he believes in. When he is appointed to lead a government program whose mission is to hunt and destroy the Resistance, he may finally find his answers - and Remy.

In a world where the powerful kill to keep their secrets, and the food you eat can change who you are, Remy and Vale are set on a collision course that could bring everyone together - or tear everything apart. In this science-fiction dystopia, the mother-daughter writing team of Kristina, Amira, and Elena Makansi immerse readers in the post-apocalyptic world of the Okarian Sector, where romance, friendship, adventure, and betrayal will decide the fate of a budding nation.

Elena K. Makansi works as a freelance editor and a cover designer for Blank Slate Communications and is about to embark on an MFA in Illustration & Design. She maintains a Facebook page called F*ck Yeah Vegetables! and spends her spare time drawing, painting, and doing research for a full-fledged cookbook-cum-encyclopedia based on the F*ck Yeah Vegetables! page that will introduce people to the multifarious delights of a plant-based diet. She's also hard at work on her next work of fiction, featuring food and magical delights, tentatively called LUNA AND THE MIDNIGHT CAFE.
Loading...
or support indie stores by buying on
(This book is on backorder)