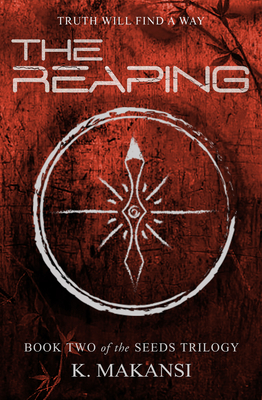 The Reaping (The Seeds Trilogy #2)

Remy Alexander wants justice. After narrowly escaping death at the hands of the Sector only to watch her world burn around her, she will defy everyone to find her revenge.

Valerian Orlean wants truth. After learning what evils the Sector is truly capable of, he must confront his past in order to create a better future.

In a world where deadly secrets lurk around every corner, and the food you eat can enlighten or enslave you, Remy and Vale must walk the line between hope and hate, love and loss, violence and vengeance, in order to unite – or destroy – their world. THE REAPING, the second book in the Seeds trilogy, will thrust the Resistance into the spotlight as the Okarian Sector publicly brands them as traitors and terrorists. As Remy struggles to find herself in a world where revenge has become her raison d’etre, and Vale tries to make sense of who he is despite his identity as an Orlean, the two are forced to fight together against enemies more deadly than they ever could have imagined.

Elena K. Makansi works as a freelance editor and a cover designer for Blank Slate Communications and is about to embark on an MFA in Illustration & Design. She maintains a Facebook page called F*ck Yeah Vegetables! and spends her spare time drawing, painting, and doing research for a full-fledged cookbook-cum-encyclopedia based on the F*ck Yeah Vegetables! page that will introduce people to the multifarious delights of a plant-based diet. She's also hard at work on her next work of fiction, featuring food and magical delights, tentatively called LUNA AND THE MIDNIGHT CAFE.
Loading...
or support indie stores by buying on