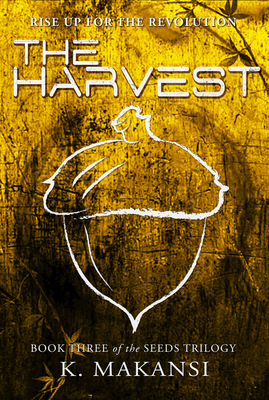 The Harvest (The Seeds Trilogy #3)

Remy Alexander wants revolution. After watching Vale fall back into the hands of the Sector, she will stop at nothing to reveal the corruption in Okaria. When she joins a secret Outsider network in the underbelly of the capital city, she must use all her skills as a fighter and an artist to show the people the truth.

Valerian Orlean wants emancipation. When he wakes up in Okaria as a political prisoner and learns what his parents have done to him, he realizes time is running out before millions of people are forever enslaved.

Together, Remy and Vale enlist the help of new friends and old to cut out the rot of unchecked power before the fire at the heart of Okaria grows to an all-consuming blaze. THE HARVEST, the third book in the Seeds trilogy, brings the terrifying truth of the OAC's MealPak program to light. As injustice spreads throughout the Sector, threatening the freedom of farm workers and laborers in the factory towns, the Resistance must find a way to end the oppressive Orleán administration once and for all.

Elena K. Makansi works as a freelance editor and a cover designer for Blank Slate Communications and is about to embark on an MFA in Illustration & Design. She maintains a Facebook page called F*ck Yeah Vegetables! and spends her spare time drawing, painting, and doing research for a full-fledged cookbook-cum-encyclopedia based on the F*ck Yeah Vegetables! page that will introduce people to the multifarious delights of a plant-based diet. She's also hard at work on her next work of fiction, featuring food and magical delights, tentatively called LUNA AND THE MIDNIGHT CAFE.
Loading...
or support indie stores by buying on