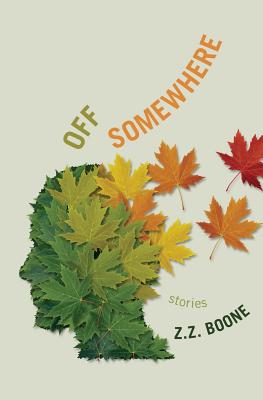 Off Somewhere, Z.Z. Boone's debut story collection, is populated by characters who seek recognition and empowerment in a world that has suddenly become baffling. The tone of these eighteen stories ranges from a humorous account of a young student obsessed with an unobtainable fast-food worker, to a cartoonist forced to face the fact that brotherly hatred runs deeper than brotherly love, to a young woman hoping a homemade cake will keep her parents' marriage intact. The characters are, for the most part, ordinary people driven to exceptional actions.

Praise For Off Somewhere…

“Z.Z. Boone's debut story collection takes a clear-eyed look at everyday folks seeking an undefined 'something else' that they can only find by going 'off somewhere' other than where they are...In each story, the human need for love, recognition, and self-respect leads the protagonists to some extreme, and often very odd, acts and behaviors–yet Boone’s skill is such that we come to believe, with them, that their acts not only make sense, but are almost inevitable.”
—Kristine Morris, Foreword Reviews

"Riveting and masterful! Z.Z. Boone takes us to the edges of contemporary life with deep humanity and biting wit. I didn't want this terrific collection to end."
—Joe DiPietro, playwright of Memphis

"With a searing sense of humor and a deft flick of the narrative wrist, Boone showcases the very stuff of the human spirit. Gobsmacked by life, the piercingly vivid characters in this collection continue on, resonating in the reader's heart and mind long after their tales have been told."
—Rachel Basch, author of The Listener

Z. Z. Boone's fiction has appeared in many literary magazines, and his story "The Buddy System" was one of the Notables in The Best American Nonrequired Reading 2014. His film (written under the name Bill Bozzone) include Full Moon in Blue Water and The Last Elephant, and his produced plays (also written under the Bill Bozzone) include Rose Cottages, House Arrest, Korea, and Buck Fever. Mr. Boone lives with novelist Tricia Bauer and their daughter, and he teaches writing at Western Connecticut State University.
Loading...
or support indie stores by buying on