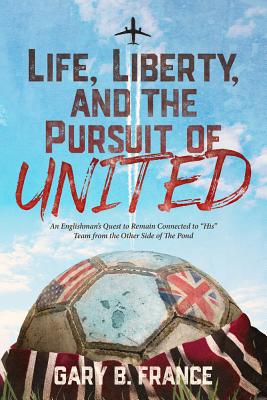 Life, Liberty, and the Pursuit of United

It is said that you don’t choose your team—your team chooses you. On April 5, 1975 Manchester United Football Club chooses a young football fanatic growing up on England’s North West coast. On this day Gary B. France becomes “United.”

Embarking on a journey thousands of miles from home, Gary is determined to reconnect with the team and the game he left behind. Before long, he is thrust into an early morning underground subculture of soccer fanatics.

Could America be waking up to soccer?

“Life, Liberty, and the Pursuit of United” isn’t simply about one man’s dedication to soccer and his team. It's about fans and the lengths to which we go to remain connected; it’s about home, where it all starts, and remembering those roots no matter how far we wander; and it's about community, characters, and—most importantly—the friendships that evolve through a shared passion for the “beautiful game.”


Praise For Life, Liberty, and the Pursuit of United…

“A plentiful read indeed! A football fanatic’s engaging diary of refusing to cut the umbilical cord between himself and his beloved Man. Utd . . . no matter what!”  —Ray Hudson, beIN Sports commentator and host of The Football Show on SiriusXM FC

“Captures the passion of a true Red Devil. Mind you, it’s not all sunshine as he encounters lows as well as highs. The highs are easy to take and make you feel wonderful about the team and winning. The lows are difficult, and, when you are so far away from home, they sting that little bit more. Amazing!”  —Tommy Smyth, soccer commentator and host of Grumpy Pundits on SiriusXM FC

“With boundless enthusiasm and nearly-breathless detail, Gary France details how he came to love Manchester United as a boy in Lancashire and how he maintained that allegiance upon moving to the United States in the 1990s. American fans of today’s Premier League will marvel at the lengths France went to—and lovingly recounts—to keep the embers of affection for his team aglow.”  —Phil West, author of The United States of Soccer and I Believe That We Will Win

“Beyond the soccer aspect, there is so much more to this story. It is the story of adapting to new environments and retaining time-honored rituals in a foreign land. It is the story of pride; of determination; of gracefully finding life-long bonds within the joyful rabble of trash talk. It is a story of resilience and sacrifice, and holding on to family from across a vast ocean. Quite honestly, Life, Liberty and the Pursuit of United embodies the fanatic sports fan in all of us.”  —Frank, Morelli, author, No Sad Songs

“More than just a document of the years leading up to Manchester United’s treble success in 1999, this is a book about friendships, passion, and celebration during a unique and difficult time for soccer lovers in the USA. Expat fans of all stripes and backgrounds will identify with this fascinating story.”  —David Witchard, Publisher, First Touch soccer magazine

“A lovely book about the perils and passions of following Manchester United from afar. A cracking read.”  —John Ludden, author and journalist

"Recommend to early-morning soccer-goers and the many British expats who follow their teams from afar."  —Booklist

“Engaging, emotional, and funny. Gary B. France gives an interesting account of how he became a part of one of those growing communities at an important time for North American soccer. You can’t help but feel connected to the various strands and relationships as he relives one of the most famous periods in British football history from a disconnected position.”  —Wayne Barton, author and sports columnist

Gary B. France has been a Manchester United fanatic for over forty years. He is in the medical field which has provided him the opportunity to help thousands of patients recover from injury. He was previously a radio DJ and hosted a Saturday morning show called The British Invasion. He lives in Alpena, Michigan.
Loading...
or
Not Currently Available for Direct Purchase