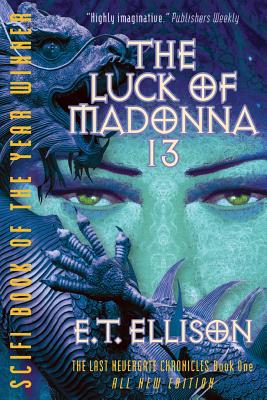 The Luck of Madonna 13

The lost key to the universe...a naive 16-year old heroine...a deadly dragon and a deadlier sorcerer with a flying castle. Get ready for a wild ride, Dear Reader. It's 2534. Life on Earth is a drab shadow of its Nevergate-era glory. But a Sixteener from a tiny IsoTown tucked away in the New Mexico mountains might hold the key to recapturing that glory. She'll just have to survive a quest that killed 249 others before her. Too lucky for her own good, Glendyl Fenderwell and her smartass QPack are banished into the wilds. But Glendyl is expected: she has something that both sides desperately need to win a bitter war that never quite ended. And her best friend is helping the enemy Caught up in this war, she'll have to become someone else to survive.... The Luck of Madonna 13, E.T. Ellison's award-winning, genre-busting first novel, tackles the nearly impossible challenge of seamlessly knitting together persuasive technological realism with such high fantasy staples as castles, dragons and magic in a 26th century future Earth that is not wildly different from our own. Does it work? Sci-fi critic/agent provocateur Gabe Chouinard (locusmag.com, sfsite.com) says "I'm going to step out on a limb and say that here we have a series the Last Nevergate Chronicles] that is destined for greatness. Without a single qualm, I can say that E.T. Ellison is writing a masterpiece that should grace the shelves of every discerning reader." January Magazine reviewer Lincoln Cho said "E. T. Ellison has brought us a fully realized future world with humor and more than a little understanding of human nature. His characters are superbly executed; his plot winds up and unwinds in completely believable ways. The Luck of Madonna 13 is also full of Ellison-created wonders - flying castles, dragons and an evil bad guy who plays ZZ Top and has a penchant for 1934 Fords." Cho likens Ellison's "cheerfully skewed wackiness" to early work of best-selling novelist Terry Pratchett. The Luck of Madonna 13 is a "sprawling epic of a tale that gleams with ideas on every page," says Chouinard, who sees Ellison as "a writer of amazing talent, able to weave lucid prose around ideas that are so profoundly bizarre, the late Jack Vance Hugo and Nebula award-winning author of more than 60 books] would scratch his head in awe." Lurking just beneath the surface of this fast-paced quest is something else entirely. "At its heart, The Luck of Madonna 13 is social criticism at its best," says Chouinard. "Ellison interweaves his prose with off-the-cuff philosophical ideas on subjects as diverse as transcendence, alternative realities, eugenics, longevity, the Violation of Interpersonal Protocols, gambling, the possession of wealth, and a host of others. And all of it is wrapped in a gleefully whimsical style that pulls you through the book like a tiger on a leash; half the time you're having the ride of your life, while the other half you're wondering if you're going to survive." Whimsical style or not, Ellison leaves thoughtful readers with more than a little to chew on. Ellison has updated The Luck of Madonna 13 substantially for the new Clownbox Press edition. FREE BONUS - THIS NEW EDITION INCLUDES THE EXCITING FIRST THREE CHAPTERS OF BOOK TWO: THE MASK OF MADONNA 13.

Award-winning author E.T. Ellison can often be found tromping through imaginary times and places in the company of imaginary characters, human and otherwise. Other times he tromps around a barnstead in the Pacific Northwest with his wife, Womana, and many of the usual barnish suspects.
Loading...
or
Not Currently Available for Direct Purchase