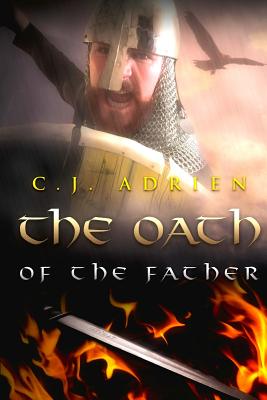 The Oath of the Father

France, 822 A.D. Abriel Haraldsson is prey on the run. He was injured in combat and taken by his men to the nearby monastery of Saint Philbert to be healed. With the best of intentions, the monks faked his death and took him away to a far-off island to be reconverted to their faith. Believing the king to be dead, suitors from the north descended upon the island of Herius with the intent to marry Queen Kenna whose small kingdom had grown wealthy from its salt trade. The powerful warlord Turgeis-known for his prowess in battle and lust for blood-set his sights upon the queen. When a messenger from afar returned with news that Abriel had survived his injuries, the warlord set to sea to ensure the king would never return. Thus began the hunt.

C.J. Adrien is a French-American author and scholar with a passion for Viking history. His Kindred of the Sea series was inspired by research conducted in preparation for a doctoral program in early medieval history as well as his admiration for historical fiction writers such as Bernard Cornwell and Ken Follett. Follow C.J. Adrien on Twitter (@ChristophAdri1), on Facebook (facebook.com/cjadrien), and on his website www.cjadrien.com.
Loading...
or
Not Currently Available for Direct Purchase