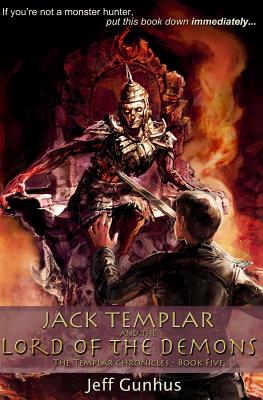 Jack Templar And The Lord Of The Demons

With two of the Jerusalem Stones in hand, Jack Templar and his friends must race the clock to find the remaining Stones as Ren Lucre's Creach forces gather strength. With two of their group now with Creach blood flowing in their veins, the team will be tested as never before. They must unite and work together if they have any hope of surviving their journey to the Underworld. The fate of the entire world hangs in the balance.

Jeff Gunhus is the author thriller and horror novels for adults and the middle grade/YA series, The Templar Chronicles. The first book, Jack Templar Monster Hunter, was written in an effort to get his reluctant reader eleven-year old son excited about reading. It worked and a new series was born. His books for adults have reached the Top 100 on Amazon and have been Foreword Reviews Book of the Year Finalists. After his experience with his son, he is passionate about helping parents reach young reluctant readers and is active in child literacy issues. As a father of five, he leads an active lifestyle in Maryland with his wife Nicole by trying to constantly keep up with their kids. In rare moments of quiet, he can be found in the back of the City Dock Cafe in Annapolis working on his next novel.
Loading...
or support indie stores by buying on