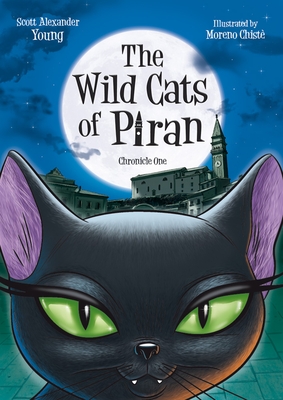 The Wild Cats of Piran

Europe's most magical cats battle for their nine lives! In this first chronicle, the wild cats encounter the ghosts of Piran--and the wicked General Rat! Join the beautiful Queen Felicia, faithful warrior Dragan, and the feral feline family for nine tales of adventure and enchantment.

Praise For The Wild Cats of Piran: Chronicle One…

Scott Alexander Young is a TV screenwriter, writer, and actor from New Zealand who lives in Budapest, Hungary. He is the creator and writer of Max’s Midnight Movies, an AXN Original Production of a twenty-six-part series about cult cinema classics. Meanwhile, in the guise of actor, Young has recently had parts in television miniseries including Dracula (broadcast on NBC), Fleming (BBC America), and Houdini (coming in 2014 on History). As reflected in Chronicle One of his Wild Cats trilogy, his writing is inspired by Eastern and Central Europe as a birthplace of myth and legend, fairy tales, and horror stories. In his side career as a travel writer, Young has been everywhere from Alaska to Buenos Aires, Hawaii to Florence. And, of course, Piran.
Loading...
or support indie stores by buying on