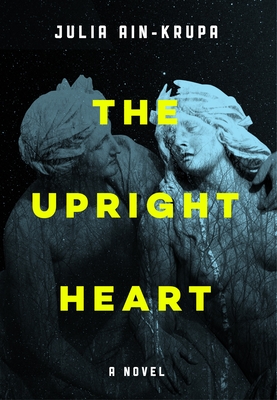 The Upright Heart chronicles the return from Brooklyn of a Jewish man, Wolf, to his native Poland soon after World War II. He is haunted by the memory of his Catholic lover, Olga, whom he abandoned to marry a woman of his own faith and start a new life in America, and who perished sheltering the parents and younger sister he left behind. Harassed on the streets of postwar Poland, Wolf is watched over by the spirits of those who died during and after the war but have yet to let go. His story is woven together with those of others, living and dead, Catholic and Jew, including the deceased students of a school for girls, a battalion of fallen German soldiers, and an orphan boy who wanders the streets of Krakow, believing in a magic pill he has conjured up as a way to survive.

Set amid the ruins of the Holocaust and the Nazis' total war, this haunting novel is at once a page-turning drama and a meditation on what it means to be human, part of a community, alive. The Upright Heart's dreamlike qualities and fluent lyricism draw the reader toward a consecrated realm, while its narrative force guides the story into the present, where survivors and their children, beset by the devastations of the past, struggle alongside the dead to perceive and appreciate the beauty of that which remains and that which might yet be.

Praise For The Upright Heart: A Novel…

"The Upright Heart is unlike anything I have ever read. It is hard for me to put into words how it is remarkable because, in surprising ways, this book exists in a place beyond words. It takes place in Poland. It is a family saga, a ghost story, and a perfect love story. World War II is the sinkhole around which the characters and events revolve, faster and faster--a feeling familiar to those of us who still have nightmares about the Holocaust. At the end of the tunnel are light, and stars, and understanding. I cried constantly while reading it, and remembered again, fleetingly, that life is impossibly precious, that reading is religion; it is one of the best things I've read." -- Liana Finck, author of A Bintel Brief: Love and Longing in Old New York

"The Upright Heart is a poetic, beautifully written novel that presents, in a moving way, the fates and memories of both Catholics and Jews creating their new reality in post –World War II Poland. The gifted young author shows here an unusually well-tuned sensibility." --Irena Grudzinska Gross, Princeton University

Praise for Ain-Krupa's previous book, Roman Polanski: A Life in Exile (Praeger):
"Julia Ain-Krupa surveys Polanski's career with the eye of an explorer and the heart of a connoisseur. . . . Her affection for his cinema shines through on every page." --David Sterritt, Chairman, National Society of Film Critics

Julia Ain-Krupa is the author of Roman Polanski: A Life in Exile (Praeger, 2010). She was born and raised in New York City, and spent her early years in Krakow, Poland. In 2012, she received a creative writing Fulbright scholarship to Poland, where this novel was conceived. She lives in New York City and in Krakow.
Loading...
or support indie stores by buying on