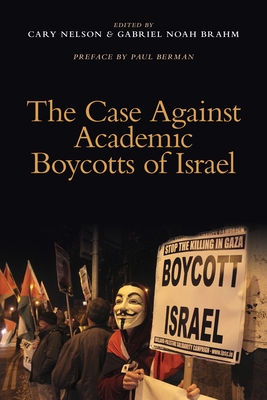 The Case Against Academic Boycotts of Israel (Paperback)

How should we understand the international debate about the future of Israel and the Palestinians? Can justice be achieved in the Middle East? Until now, there was no single place for people to go to find detailed scholarly essays analyzing proposals to boycott Israel and the Boycott, Divestment, and Sanctions (BDS) movement of which they are a part.

This book for the first time provides the historical background necessary for informed evaluation of one of the most controversial issues of our day- the struggle between two peoples living side-by-side but with conflicting views of history and conflicting national ambitions. This book encourages empathy for all parties, but it also takes a cold look at what solutions are realistic and possible. In doing so, it tackles issues, like the role of anti-Semitism in calls for the abolition of the Jewish state, that many have found impossible to confront until now. The book gathers essays by an international cohort of scholars from Britain, Israel, and the United States.

Cary Nelson is Jubilee Professor of Liberal Arts and Sciences at the University of Illinois at Urbana-Champaign and the immediate past president of the American Association of University Professors. His thirty authored or edited books include No University is an Island: Saving Academic Freedom. Gabriel Noah Brahm is Associate Professor of English at Northern Michigan University, coauthor of The Jester and the Sages: Mark Twain in Conversation with Nietzsche, Freud and Marx and coeditor of Prosthetic Territories: Politics and Hypertechnologies.
or
Not Currently Available for Direct Purchase
Copyright © 2020 American Booksellers Association