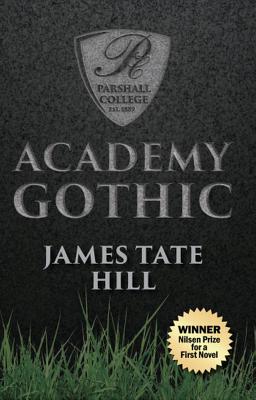 Tate Cowlishaw is late for another faculty meeting when he discovers the body of Scoot Simkins, dean of Parshall College. Cowlishaw might be legally blind but sees that a man with three bullets in his head didn’t put them there himself. The police disagree. When Cowlishaw investigates, he is told his teaching contract won’t be renewed. Suspects aren’t hard to come by at the college annually ranked “Worst Value” by U.S. News & World Report. While the faculty brace for a visit from the accreditation board, Cowlishaw’s investigation leads him to another colleague on eternal sabbatical. Before long, his efforts to save his job become efforts to stay alive. A farcical tale of incompetence and corruption, Academy Gothic scathingly redefines higher education as it chronicles the last days of a dying college.

“Academy Gothic is a fast-paced, hilarious, who-done-it noir jammed with jaw-dropping similes even Raymond Chandler would envy. Infused with impeccably timed, deadpan humor, the robust prose between these pages is crafted by a true wordsmith." —Marie Manilla, author, The Patron Saint of Ugly

James Tate Hill was born in Charleston, West Virginia. A graduate of the creative writing programs at Hollins University and the University of North Carolina Greensboro, his fiction has appeared in Story Quarterly, Sonora Review, The Texas Review, The Laurel Review, and elsewhere. He is the fiction editor for the literary magazine Monkeybicycle and lives in Greensboro with his wife, Lori.