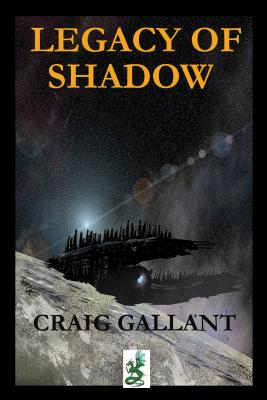 The Legacy of Shadows

Alien contact on earth and the galaxy is threatended

Penumbra, a haphazard city of outcasts, rebels, and malcontents, has floated around a dead planet in a backwater system for longer than living memory can recall. Its towers abandoned starships melded to an ancient, mysterious core, Penumbra is the last remnant of chaotic individualism in a galaxy where conformity to the will of the all-powerful Galactic Council is paramount. Dropped into this dangerous mix is Marcus Wells, a human of Earth who has squandered his potential to live a life of least resistance, and his adventurous friend Justin. Immediately entangled in local politics and targeted by a vengeful representative of the Council determined to drag the city back into the fold, Marcus has a choice to make: continue following the path of least resistance and allow Penumbra to fall, or show these aliens what a truly determined Human can accomplish.

Craig is from Bedford New Hampshire where he does his best to warp space and time to fit far more activity into each day than anyone, including his wife, thinks would be advisable. During the day Craig teaches Theatre and Literature courses to the intrepid students of Milford High School. After hours Craig actively pursues kickboxing and mixed martial arts, and is one of the two hosts of the wildly mediocre and not-too-horrible general gaming podcast The D6 Generation. He is husband to a remarkably supportive wife and father to clearly the smartest, cutest, and most promising three year old on the planet (an entirely objective assessment). Craig plays games whenever he can find the time and the opponents, ranging from his recent favorite, a classic South American dice game called Perudo, to whatever the local tabletop war-game flavor of the month happens to be. And in all the voluminous free-time this schedule allows, Craig writes.

Always an avid reader and a writer for his own pleasure, recently Craig has been able to parlay that dream into a stunningly-exciting reality. For two years now Craig has written articles, rules, short stories, and background fiction for companies such as Spartan Games and Fantasy Flight Games. Craig has written several books for Zmok Books including tie ins for WIld West Exodus, Antares and several stand alone books.
Loading...
or
Not Currently Available for Direct Purchase