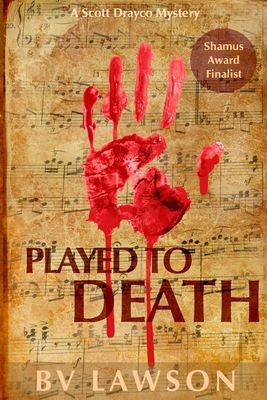 Scott Drayco isn't a typical detective: a former concert pianist with synesthesia, he turned to law enforcement when a violent attack put an end to his music career.

After Drayco inherits a rundown Opera House in a Virginia seaside town following a particularly brutal case, he just wants to arrange a quick sale for the unwanted "gift" while nursing his battered soul in a peaceful setting near the shore.

Those hopes are shattered when a dead body turns up on the Opera House stage, a mysterious "G" carved into the man's chest. With himself a suspect in the murder, Drayco digs into very old and very dangerous secrets to solve the crime and clear his name.

But first...Drayco must dodge a wary Sheriff, hostility over coastal development, and the seductive wife of a town councilman-before the tensions explode into more violence and he becomes the next victim.

Over 500 five-star reviews on Goodreads A Shamus Award finalist and Named Best Mystery in the Next Generation Indie Book Awards.

Poet, author, blogger, and journalist BV Lawson grew up in rural East Tennessee, where she won a poetry competition at the age of 10 that spurred her interest in writing as a career. After a detour earning two degrees in music, she continued her passion for creative endeavors by writing feature articles and fiction for dozens of national publications. A three-time Derringer Award finalist and 2012 winner for her short stories, BV was also honored by the American Independent Writers and Maryland Writers Association for her Scott Drayco series. BV currently lives in Arlington, Virginia, with her husband and enjoys flying above the Chesapeake Bay in a little Cessna.
Loading...
or support indie stores by buying on