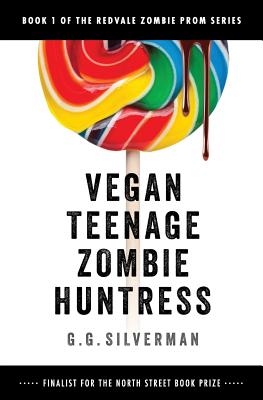 "I never intended to become a zombie huntress; I had only intended to protest prom, high school's last bastion of patriarchal society. I felt bad for the girls in my school, who flocked to prom like it was the second coming of Christ, complete with double-rainbows and unicorns." -Clarissa Hargrove in VEGAN TEENAGE ZOMBIE HUNTRESS
* * * * *
Clarissa Hargrove thinks prom sucks. She's been protesting it for weeks, but the conformist sheep that go to Redvale High could care less. Not one single girl has ditched her prom gown in the name of feminism, except for Clarissa's loyal, underappreciated BFF Cokie. But Clarissa is still on a mission to save more souls-she'll be at prom, with her bullhorn and picket signs, telling girls they have one last chance to ditch their hooker heels and claim their independence before high school is over. That night, Clarissa drags Cokie to school to protest, but almost everyone at prom has turned into flesh-eating monsters. Trapped in a high-school zombie hellhole, the girls realize they've never taken a chance on love, and set out on dangerous quest to save their crushes.
But there's one teensy little problem.
Clarissa is vegan and hates violence of any kind. Will Cokie and Clarissa survive?
A mashup of hilarious pop culture hits like Daria, Mean Girls, and Shaun of the Dead, VEGAN TEENAGE ZOMBIE HUNTRESS will have you on the edge of your seat until the very end.

G.G. Silverman is an award-winning author who lives north of Seattle with her husband and dog, both of whom are ridiculously adorable. When she isn't writing, she loves to explore the mossy woods and wind-swept coast of the Pacific Northwest, which provide moody inspiration for all her stories. She also enjoys bouts of inappropriate laughter, and hates wind chimes because they remind her of horror movies.
Loading...
or
Not Currently Available for Direct Purchase