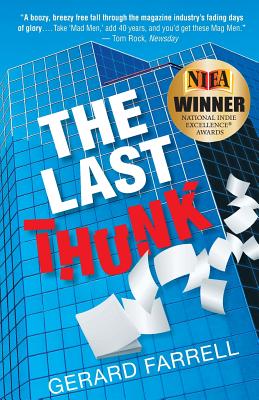 THUNK It's the sweet sound an ad-packed magazine makes when it's dropped on a table. At glitzy Carlyle Nash Media, it's the sound of success. And star publisher Mitch Blake has been happily hearing it for a decade. But when the heavily hyped debut issue of World Magazine gets panned in the press and advertisers start to flee, Mitch must control the damage. Can he right the ship and protect his reputation? Or will both be sunk by Paul Cavanaugh, a hard-drinking, paranoid, stress-prone staffer who has stolen an item Mitch needs back to avert disaster: a miniature beach ball.

One part pre-recession satire, one part diary of a marketing man coming undone, The Last Thunk is a story of betrayal and friendship, love and survival in the crazy, gritty, glamorous world of magazine advertising...as told by the beach-ball thief himself.

"A BOOZY, BREEZY FREE FALL THROUGH THE MAGAZINE INDUSTRY'S FADING DAYS OF GLORY. THE LAST THUNK depicts all the ambition, paranoia, and ethical ambiguity of middle management, and the toll that culture takes on its inhabitants. Take 'Mad Men, ' add 40 years, and you'd get these Mag Men who are captured so vividly by Farrell's four-color glossy writing. THUNK reverberates."

"THIS IS A TERRIFIC BOOK--FAST-PACED, HILARIOUS, and so jam-packed with genuine insider dish your eyes will pop. I couldn't put it down "

"A fast-paced, wickedly funny romp from a writer who has been through the wringer of the magazine world."

Gerard Farrell has worked in the magazine industry since the late '90s for brands including The New Yorker, Rolling Stone, Allure, and the ill-fated business magazine Cond Nast Portfolio. His short humor has appeared in the literary anthology The Man Who Ate His Book, and he is a frequent contributor to the literary webzine Ducts. He lives in Farmingdale, NY with his wife, Maricel, and their three children.