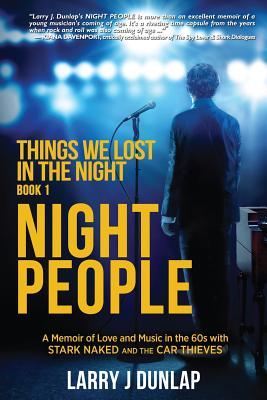 Things We Lost in the Night

LARRY J. DUNLAP DELIVERS A FAST-MOVING, romance-filled memoir of a young singer and his friends search for success in the 1960s music business of California and Las Vegas - if you liked memoirs from Carly Simon, Keith Richards, Patti Smith, Tommy James, and "The Wrecking Crew," you're sure to enjoy Night People.

"Instead of sharing a life with the woman I'd expected to be married to forever, my friends and I shared a dressing room, divided by thin wallboard, with a covey of topless showgirls and dancers."

In 1965, when Larry's scattered-to-the-winds, Indianapolis rock and roll vocal group is improbably reunited in distant San Francisco, they barely survive their clumsy transformation into entertainers in a rock and roll nightclub band. As their fortunes change, Larry and his band are plunged headfirst into an adventure that lures them into mob-run nightclubs, Las Vegas showrooms and backrooms, famous Hollywood night spots and recording studios, celebrity managers, and passionate romance--and the sacrifices it demands.

It's the West Coast in the mid-Sixties: a historic era of tectonic cultural, political, musical, and sexual upheaval--and the draft. The band scrambles to overcome, or at least endure, every obstacle in its path. But in the tumultuous nights the band inhabits, where things and people are too easily found and lost, everything Larry thought he knew about life, love, and himself is being challenged.

"Dunlap's sense of transcendence is similar to the sensation Keith Richards describes in his memoir, 'Life: ' ...you leave the planet for a while...' Reliving his rock and roll years in his wonderful memoir, NIGHT PEOPLE, ' Larry Dunlap, must have left the planet for a while, too." I loved it, and highly recommend it. -- Kiana Davenport, The Spy Lover, Shark Dialogues

"Whether or not you remember the swift intoxicating music of that era or the seismic shift of mores that burst from the free-love movement, NIGHT PEOPLE] captures the beat of that misty time when the country suffered "a growing thirst for individual freedom, a desire to escape from an ever-darkening shadow of war, and a national hangover following the public murder of a young and popular president." -- C.D. Quyn, Steph Rodriguez, Manhattan Book Review

WHAT READERS ARE SAYING

One of the best biographies written by a musician
A Riveting, Mythic, Rock and Roll Memoir
Wonderful Excellent Read
Thoroughly Entertaining.
A Great Read
A Window Into a Fascinating Era
Rock and Roll, baby
The Naked Truth
Five Stars
Captivating and Emotive
Musical Reality
A Must Read
A Great Read About An Exciting Life
Music Has Found Me Again
SO Worth Reading
My Life Seemed Extremely Boring After Finishing "Night People"
Lessons of Life, Love, and Sex in the 60s
Genuine, Exciting, Graphic and Memorable - life in the 60's
Fantastic Coming of Age Memoir
Compelling
Great Look At An Era