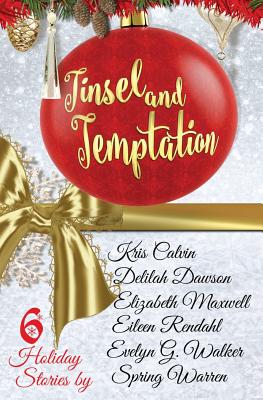 Six authors. Six voices. Six genres. One winter season. Once Upon a Kidnapped Santa
Delilah Dawson What happens when you mix a baker, a kidnapped Santa, a remote cabin and a snowy Christmas Eve? A recipe for the best sexy Christmas Day ever Fire and Fruitcake
Eileen Rendahl A new story from Eileen Rendahl's award-winning Messenger series. It's baby's first Hanukkah and Melina and Ted have their hands full figuring out what to expect when you're expecting a fiery conflagration when they get a call about a mysterious creature stuffed full of fruitcake and up to no good. Hearts Wide Open
Elizabeth Maxwell Julia Orchard has never worried about karma. She's young, beautiful and living large in New York City. Sure, she's done things in the name of success that she's not proud of, but who hasn't? Then during the biggest pitch of her career, the ghost of her dead husband appears with a message: you have until Christmas morning to pay your debts or face an uncertain future. As Julia races against the clock, she begins to realize there's power in small acts of kindness and facing life with your heart wide open. Orion's Mirror
Evelyn G. Walker People do change. As Halley is headed home for the holidays after her first semester in college, she knows this to be true. But will her family and closest friend treat her just the same? Not Even a Mouse
Spring Warren It's the darkest, coldest time of year and Ned is making a killing selling high octane cordials to make the prairie holidays merry and bright. He decides to make one more stop at a little house with a light in the window before heading home on the night before Christmas. The Merriest of Murders
Kris Calvin A California senator's holiday party might be just the place for lobbyist Maren Kane to put a bad break-up behind her and meet someone new. Until Santa turns up dead in the senator's pool and Maren's a suspect Agatha Christie meets House of Cards under the mistletoe.

A former local elected official, Kris Calvin's debut political mystery novel One Murder More: A Maren Kane Mystery is published by Inkshares. Educated at Stanford and UC Berkeley in psychology and economics, Kris has been honored by the California State Assembly and the Governor's office for her leadership in advocacy on behalf of children. Delilah Dawson has always loved reading romance novels, and feels so lucky to be an author who can share her own plots and characters too. Elizabeth Maxwell is the internationally published author of several novels, including most recently Happily Ever After (Touchstone). She also writes under the name Beth McMullen. Eileen Rendahl is the national-bestselling and award-winning author of the Messenger series and four Chick Lit novels. Her alter ego, Eileen Carr, writes romantic suspense. When she's not being one of the Eileens, she writes cozy mysteries as Kristi Abbott. Evelyn G. Walker writes short stories, and is currently working on a novel. She lives in the Bay Area with her husband, two kids and a dog. Spring Warren is a Northern California writer. Read more about Ned and his adventures in Turpentine (Grove Atlantic) and about gardening in The Quarter Acre Farm (Seal Press).
Loading...
or support indie stores by buying on