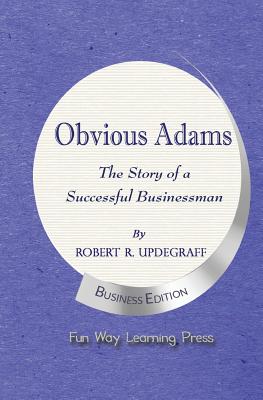 The Story of a Successful Businessman

OBVIOUS ADAMS was first published as a short story in the Saturday Evening Post in April, 1916. Though it was the story of an advertising man, it was quickly recognized as presenting a germ idea basic to outstanding success in the business world and the professions. Harper & Brothers brought out the story in book form in September of the year of its publication in the Post. The book met with a ready sale. In reviewing it, the New York Times said, "The young man who is going to seek his fortune in the advertising business should have Obvious Adams for a handbook. Indeed, any young man who is going to seek his fortune in anything might be aided by the common sense and business acumen displayed in this little volume." "Obvious Adams" soon became a legendary character. He was quoted in business conferences and at board meetings. Heads of companies wrote the author to ask if the hero of the story was a real person; that if he was they wanted to engage his services. His "obviousness" influenced the thinking of some of the outstanding industrial leaders of the day. Fun Way Learning Press is now proud to publish a new Business Edition of this classic text, updating some of the author's original usage and including a Manager's Toolkit for the business owner or executive who wants to leverage the "obvious" in his or her own business.

Obvious Adams was the first of many published writings of this author. They ranged from magazine articles to hardcover books. It was his hobby. As his son once said, "I never saw Dad whenever he was on vacation or in his 'spare time' that he didn't have a clipboard, some yellow copy paper and several pencils on hand, drafting his latest article or book." Although he wrote for pleasure, sometimes anonymously and sometimes under pen names when not under his own name, most of his writings were published. In addition to magazine articles, he authored four major books: Captains in Conflict, Yours to Venture, All the Time You Need, and Try Giving Yourself Away. Bob Updegraff, as his friends and clients called him, was a business counselor serving as a personal advisor over a period of forty years to the top management of such leading companies as: Aluminum Company of America; American Brake Shoe Company; General Foods Corporation; W. T. Grant Company; John Hancock Mutual Life Insurance Company; Hart, Schaffner & Marx; Jewel Companies, Inc.; Kellogg Company; Lever Bros. Company; Shaw-Walker Company and Westinghouse Electric Corporation. He also carried out a special project for Reader's Digest to which he had contributed several articles under various pen names. He served as Director for Scarsdale National Bank for 32 years; Jewel Companies, Inc. for 25 years; and W. T. Grant Company for 18 years. Although he resigned from all boards at age seventy as a matter of principle, he remained associated with several of his long-term clients well into his eighties. He was still writing articles and drafting books he hoped to publish at the time of his death at 88.
Loading...
or support indie stores by buying on