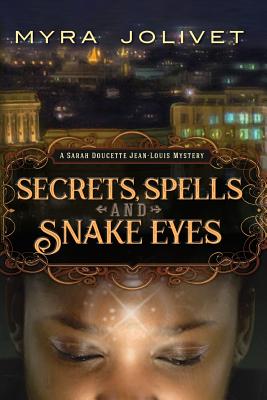 Back home from a Godforsaken Louisiana family reunion, Sarah Doucette Jean-Louis jumps heart first into a murder investigation with her hot and sexy former attorney, Manuel. It's a new life for the Oakland family therapist post-scandal. Manuel's client is charged with murder and he wants Sarah to use her gift of visions to help his investigator find the real killer. In her unique and humorous style, Sarah brings her head-spinning psychic intuition, large vodka bottles and a few other surprises to the case. Yadira Lopez's stepson is the accused, but Sarah feels there's something spine chilling and eerie about Yadira. Sarah props up her visions with help from some unbelievable sources. And if the case weren't complicated and odd enough, Sarah's life long nemesis, cousin Stacy, shows up in California. Her year will be mysterious and murderous with a touch of crazy Life remains a contrast of contemporary northern California and old-world Louisiana Creole traditions for Sarah. She is a trained family therapist with volatile relationships. Her background of science and logic is defiled by persistent visions into the future. And while it is Creole tradition for a woman to marry, Sarah has had many loves but no husband. In Secrets, Spells and Snake Eyes, Sarah's second journey, she learns to handle her mystical second sight and prepares to fall in love-again. We laugh and feel a bit tipsy from all of the action and the Sunday martini brunches with her girlfriends. Laissez les bon temp rouler, mon cher.

At 4 years old, I had an imaginary friend. I think my storytelling began there. Later came a career in television news, politics and corporate communications; more writing. Working with writing coaches and editors, I began a series of murder mysteries that connect northern California to the colorful Louisiana Creole culture. I am a San Francisco Bay Area native with Louisiana Creole roots. In our quiet Berkeley neighborhood, my parents often hosted gumbo Sundays seasoned with hushed stories of relatives who spoke to the dead and had cast more than a spell or two. Those "secrets" fueled the voice of mystery and humor within me.
Loading...
or support indie stores by buying on